My research explores the Koankre shrine in the Ohene Akura village, among the Kwahu ethnic group in the Eastern region of Ghana. It has been in existence throughout diverse periods in Ghana’s religious landscape and provides for various needs of people in the immediate and Kwahu community at large. During my previous study, I visited most shrines within the Akan-speaking communities in the Eastern part of Ghana. I noticed that most of them are neglected as a result of the introduction of Christianity into such communities. Meanwhile, the Koankre shrine has remained in operation from the pre-colonial era and is by no means extinct within the Kwahu society. The study also showed that the shrine is headed by an old age priestess, Okomfo Akosua Atuobua, who commands respect, authority, and power in the Koankre shrine and Ohene Akura village respectively. Despite changing times and influences due to the existence of Christian religious groups, the shrine still survives and has sustained the traditional religion and cultural practices of the Kwahu Atibie community. This research will critically assess the traditional religion and the cultural practices that have sustained the Koankre shrine through different eras, integration, and acculturation introduced by the Christian groups to the Koankre shrine and vice versa, and finally understand how people identify with this supposedly persistent shrine in the midst of Christian influences in the Kwahu Atibie community to know if such interactions can bring tensions, conflict, and peace in the Kwahu Atibie community.

Koankre, a powerful deity, originates from an ancestry of the Kwahu ethnic group. Against this background, nearly all people in the Kwahu Atibie and its surrounding environment identify and relate to it at many levels to serve their practical and spiritual needs. Although the shrine is in vibrant operation meeting the traditional as well as modern needs of adherents, many of its adherents identify secretly and do not openly participate in its public manifestations. In my PhD research, I am interested in the remarkable resilience of the Koankre shrine in providing satisfactory results to adherents hence its existence through various periods and the impact of Christianity on the Kwahu Atibie community. In this context, I will explore the interactions and perceptions of Christian believers about the shrine and the intersections of their religious activities that might create religious tensions and conflicts among the Kwahu. Undertaking an ethnographic study of the Koankre shrine, I will examine the materiality such as objects used in worship, relationships of co-existence, practices, and interactions that may give rise to conflicts and conflict resolutions among the Kwahu.

This research will add to the knowledge of the ongoing scholarly debates shaping the development of Ghana’s indigenous religious landscape.

This research aims to add to this debate by: 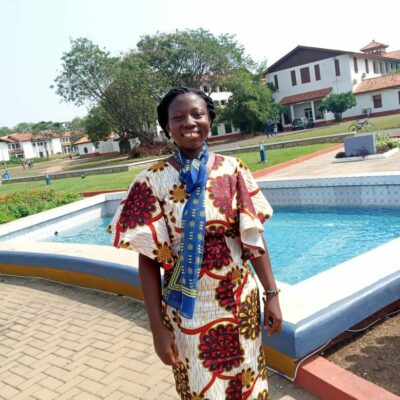