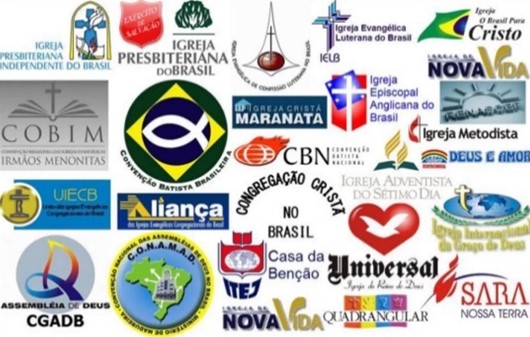 Churches, logos and the name of Jesus Christ ©

In the 19th century, the official religion in Brazil was Catholicism. The government allowed protestant churches to offer religious services only if these churches did not seem like churches. According to Brazilian laws, they were not allowed to exhibit crosses and other religious objects. This helped to guarantee the Catholic hegemony.

During the 20th and 21st centuries, the number of evangelical churches increased significantly and the conflicts among them could be noticed in the same proportion. One example of these disputes is the name of the main Brazilian Pentecostal church, Assembly of God. The former name of this denomination was Missão da Fé Apostólica (Mission of Apostolic Faith), but the pastors decided to change it to Assembly of God. This name was an inspired by an American church with the same name. In 1958, the religious group “Assembly of God” was registered by the Assembly of God in Porto Alegre city, giving rise to great controversy with the Convenção Geral das Assembleias de Deus no Brasil – CGADB (General Convention of the Assembly of God in Brazil). After some negotiations, in 2004, the Porto Alegre church returned the name to the CGADB (Araújo, 2006).

There are claims from CGADB’s pastors denouncing these independent churches. They claim that only the Assemblies of God churches enrolled in the CGADB represent the true Pentecostal church in Brazil and that the other denominations are falsely using similar names to legitimize their status. The CGADB churches also have used the category “classical Pentecostalism” to classify their denominations as authentic and distinguish themselves from others. Those pastors are proud for being the largest Evangelical Church in Brazil with over 12 million people (2010 census), but they ignore that this amount is composed by thousands of believers from churches who they criticize. At least in the census, the diverse practices or beliefs seem to be bigger than the Assembly of God itself.

The other important denomination that is involved in conflicts in Brazil is the Universal Church of the Kingdom of God (hereafter UCKG). This church is present in more than 100 countries all over the world. It was founded and is managed by the 75-year-old Bishop Edir Macedo, one of the most important religious leaders and businessmen in Brazil. Macedo has led the church since the late 1970’s. In a leadership election, he got more votes than his brother-in-law R.R. Soares, who created a new Pentecostal church, the International Church of the Grace of God.

Since then, Macedo has moved bishops and pastors under his control as if they were pieces on a chessboard. According to the press, the next UCKG leader will be Bishop Renato Cardoso, Macedo’s son-in-law. This is the reason that many important bishops have fallen in Macedo’s chess game, such as João Leite, Alfredo Paulo, Natan Silva, Rogério Formigoni and Romualdo Panceiro.

Panceiro was the vice-leader in the hierarchy of the UCKG, and he decided to create his own denomination, Church of the Nations of the Kingdom of God, after he was fired. This situation happens frequently in the religious field in Brazil, but these new churches usually keep practicing similar rituals as the former churches and preach the same doctrines, like Word of Faith Theology. Therefore, in some sense, they are so similar that believers might have the feeling of being in an UCKG church. Several churches created by dissidents from UCKG have been given similar names, such as the new denomination founded by Panceiro. The following table shows how similar the names of the churches are:

Beyond the evident similarity of the names of the denominations, Macedo considered that Panceiro was bolder than other competitors of the religious field and issued a lawsuit against his ex-colleague. In the ongoing court battle, Macedo’s lawyers underline that the new competitor is using the name of Jesus Christ in the same way as the UCKG, that is, with the same typography. They also complain about the similarity of the churches’ logos. The logo of the UCKG is a red heart and a dove to represent the Holy Ghost, while Panceiro’s church logo is a cross and a dove.

The UCKG lawyers blame Bishop Panceiro of scamming people and “getting economic advantage” through his brands and symbols, such as the church name, the dove and the name of Jesus Christ. According to them, the ex-Bishop was using this strategy to induce believers to give their money to the church. The irony is the UCKG is also constantly accused of exploiting people.

This remind us of the Rodrigo Toniol piece[2] about the court decision that prohibited Catholic women from the NGO “Católicas pelo Direito de Decidir” (Catholics for the Right to Decide) of identifying themselves as Catholics. This lawsuit has ideological aspects and has been made by a conservative Catholic institution that alleges that these women are not Catholics because of their progressive concepts about sexual and reproductive rights. With a conservative group using religious arguments to support its, position against abortion rights, this is a dispute in which religious, political, and judicial aspects are intertwined.

By contrast, the conflicts among the churches in the Pentecostal field are not ideological. It Is important to stress that Macedo is the only Brazilian Pentecostal leader to defend abortion (Teixeira, 2012). However, his viewpoint is not related to the progressive stance held by many Brazilians who support the possibility of abortion. According to ex-pastors, the UCKG leadership forces pastors to get a vasectomy and forbids the wives of the pastors to become pregnant so as to be able to control and move bishops and pastors between churches all over the world. The Pentecostal field brims with struggles for “monopoly over the legitimate exercise of religious power” (Bourdieu, 1991: 23). Sermons, imprecatory prayers and the classification of dissidents by their ex-colleagues as “rebels” or as “cursed” also reveal such struggles. And so do the appeals to the court.

Thus, even though evangelicals over and over insist that the names of denominations cannot “save souls,” they keep using these names to discuss religious legitimacy. – In addition to mutual accusations, bishops and pastors resort to the courts to prove that they have no economic interests, but only in saving “lost souls.” They intend to convince society that their signs just point to heaven. If the complaints of the established against the founders of new churches are considered well-founded, perhaps in the future believers will need to ask for judicial authorization to pray in the name of Jesus Christ and to use this name in some names of the denomination. Probably we will see the sign: Jesus®, trademark, very soon.

Clayton Guerreiro is a PhD Candidate in the Program of Post-Graduation in Social Sciences at University of Campinas, Brazil. Visiting researcher at Religious Matters Project, Utrecht University. Researcher in Laboratory of Anthropology of Religion – LAR and of the Group of Studies about Mediation and Otherness – GEMA, Brazilian Center of Analysis and Planning- CEBRAP.