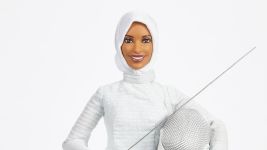 Fantastic or just Plastic? A Critical Reading of an ‘Empowered’ Muslim Doll in American Society

Fantastic or just Plastic? A Critical Reading of an ‘Empowered’ Muslim Doll in American Society

In November 2017, Mattel, the company of the popular Barbie doll, released its first hijab-wearing doll. The Barbie is modeled after Ibtihaj Muhammad, a female Muslim-American fencer that won a bronze medal during the Olympic Games of 2016 in Rio (Aljazeera 2017). The brand has introduced the modestly clad Barbie as part of a special edition series dedicated to female empowerment. Connected through the label ‘Shero Dolls’, the doll is featured next to dolls modeled on people such as artist Frida Kahlo and aviation pioneer and feminist Amelia Earhart. Describing its special collection, Mattel reports that “since 2015, [Mattel has] honored women who continue to break boundaries” (Barbie, n.d.). The Barbie created in the likeness of Ibtihaj Muhammad (hereafter ‘Ibtihaj Barbie’) is located in the intersection of Islam, feminism, and a pluralistic society, and functions as a window from which to shed light on the broader discourse on female ‘Muslimness’ in the United States. Although perhaps a signal of a right step towards greater accommodation of (religious) diversity, I am of the opinion that by itself the Barbie reflects an implicitly prejudiced image of empowerment of Muslim women.

On its official website Mattel describes Ibtihaj as “the first female Muslim-American athlete to earn a medal”, and “the first Muslim-American woman to wear a hijab while competing” (Barbie, n.d.(a)). In addition to this narrative, the doll is widely portrayed as the American celebration of Muslimness, with the Ibtihaj Barbie as a representation of Muslim women, a symbol of female agency against gender-stereotypes, a denial of Islamic culture as oppressive towards women, and the celebration of the American principle of equality that allows American women from diverse backgrounds to reach their goals (Aljazeera 2017; Hauser 2017; Kumar 2018; Renee 2017). However, the Ibtihaj Barbie remains the single example of a publicly acknowledged Muslim Barbie. Therefore, understanding her as the symbol of female Muslim empowerment would endanger the awareness of the great diversity of women belonging to the Muslim community. In my opinion, in this failure of acknowledgement a somewhat essentializing multiculturalist attitude presents itself.

In its outdated form, multiculturalism can lead to the treatment of religious groups as indivisible entities, since the precedence it grants to group rights over individual rights makes it prone to overgeneralization. On a theoretical level the United States is not compatible with a multiculturalism exactly in the form envisioned by political theorists like Tariq Modood (2007). The mutual exclusion, or ‘wall of separation’ between state and religion that the idealized American model of political secularism prescribes would prevent both the political mobilization of religious groups and flexible state arrangements for these groups’ varying needs (Bhargava 2010, 13-4; Modood 2007, 39, 46). Nevertheless, reality departs from theory, and in practice a wall of separation exists neither in politics nor in society in general. A multiculturalist mentality in the Modoodian sense of the term for instance reveals its presence in America’s system of hyphenated identities, such as Muslim-American. Such a system indicates that society preserves distinct group identities, while simultaneously upholding a sense of every individual’s citizenship and national belonging.

Thus, if currently the Ibtihaj Barbie is not unequivocally the symbol of Muslim-American female empowerment, what is she? Informed by insights from anthropologist Su’ad Abdul Khabeer’s ethnography of Muslim Cool in the United States, I would say that the doll rather functions as a symbol of the specific female Muslimness that is privileged by American society. Despite growing pluralism in the United States, an understanding of Islam as being traditional and patriarchal, and distinctly differing from liberal American values remains pervasive (Alsultany 2012, 71; Brown et al. 2017, 60; Khabeer 2016a, 136). For this reason a widespread American celebration and commodification of female Muslimness in the shape of the Ibtihaj Barbie can reasonably be expected to refer to a symbol of Muslimness departing from the stereotypical image of Muslim women. And indeed, Ibtihaj Muhammad fits into what Melamed refers to as the “official antiracism of neoliberal multiculturalism” (Melamed, cited in Khabeer 2016, 82). Competing in the Olympic Games while wearing a hijab is a signal of continued commitment to her Islamic faith. However, besides this all other characteristics that have made Muhammad eligible to become the model for a Barbie doll are features celebrated in wider American culture: feminism, determination, perseverance, and not least importantly, American nationalism. Muhammad wearing the hijab has been privileged by society because all her other openly available identity-markers identify her as a Westernized American citizen. This makes her a ‘good Muslim’ suitable for commercialization, in contrast to for example more conservative Muslim women that do not personify the ‘American dream’ to the same extent.

The idea that one should be careful in dubbing the Ibtihaj Barbie a celebration of American diversity and tolerance towards religion is further strengthened by the following. In the same year as Ibtihaj Muhammad, another Muslim-American woman (Barker 2018) competed in the Olympic Games. She became the first American woman to ever win Olympic gold in the 400-meter hurdles (Wolken 2016). What distinguished her most clearly from Ibtihaj was the fact that she did not cover her hair while competing. Although technically she claimed her victory five days after Ibtihaj, the performance of Dalilah Muhammad certainly raises questions about the unanimous praise of Ibtihaj as the first Muslim-American woman to win an Olympic medal. Ibtihaj and Dalilah, both African American Muslim women, both honored internationally for their achievements, yet Ibtihaj as a Muslim-American worthy of a personalized Barbie doll, and Dalilah as ‘merely’ an American athlete (Wolken 2016). This contrast indicates the importance of the hijab as a marker of Muslim identity. Just as African American Muslim Blackness does not fit into the hegemonic discourse on Islam in America (Khabeer 2016, 84), neither does a Muslim woman with uncovered hair. The hijab fits into the hegemonic cultural image of Muslimness as otherness, and when it disappears, Muslim identity disappears from discourse accordingly.

On the one hand, in mixing Islam with ‘Americanness’ Mattel challenges this hegemonic image and sets a step into the right direction. The Ibtihaj Barbie illustrates the acceptance of hijab-wearing Muslims as Americans, and acknowledges their choice to bring religion into the public sphere by wearing a hijab. Therefore, the choice to select Ibtihaj as a role model for girls might seem more emblematic of American acceptance of religious diversity than if Dalilah had been selected, who in terms of appearance more closely conforms to the orthodox image of Americanness. On the other hand, however, the celebration of the veiled Ibtihaj as a symbol of female Muslim empowerment implicitly speaks of an enduring hegemonic essentialism towards Muslim identity and Islam. A Barbie created in the likeness of Dalilah Muhammad—with uncovered hair—would not be considered Muslim. Furthermore, the question remains whether the manifestation of Ibtihaj’s empowerment is her Olympic medal, or the fact that she obtained it while wearing a hijab. Have the feminists that were cheering for Ibtihaj from the sidelines unknowingly become part of a discourse that perpetuates the stereotype of Islam as necessarily conservative, and that essentializes and ‘others’ female Muslim identity? Americans clearly continue to find themselves in an uneasy position with regards to Muslim identity in a pluralistic society. In an attempt to symbolize respect for diversity, Mattel’s choice to focus solely on Ibtihaj while ignoring Dalilah paradoxically perpetuates a false conception of America and Islam as two “undifferentiated wholes” within and between which diversity and fluidity are not a possibility (Khabeer 2016a, 136).

Looking ahead, it remains to be seen whether the release of the Ibtihaj Barbie will become a positive or negative development for the future of both female Muslim empowerment, as well as the Muslim-American community in general. The barbie could be the start of the incorporation of more religiously diverse Barbies into the assortment of Mattel, and consequently the better representation of Muslim and other religious women (and men) in American popular culture. However, considering the fact that no other officially religious dolls have been introduced in more than a year’s time, this seems like an unlikely trend. Alternatively, the presence of modest dolls in the Barbie assortment could also remain limited to a special edition doll. This would make the Ibtihaj Barbie not much more than an objectification of the ‘good Muslim’ in the religiously diverse landscape of American society.

Alsultany, Evelyn. 2012. “Evoking Sympathy for the Muslim Woman.” In Arabs and Muslims in the Media: Race and Representation after 9/11, 71-99. New York (NY): New York University Press.

Barker, Sarah. 2018. “Hurdles on the track were not the only obstacles on runner’s path to Olympic gold”. Women in the World. Accessed December 12, 2018. womenintheworld.com/2018/04/24/hurdles-on-the-track-were-hardly-the-only-obstacles-on-this-runners-path-to-olympic-gold/

Brown, Christia Spears, Hadeel Ali, Ellen A. Stone, and Jennifer A. Jewell. (2017). “US Children’s Stereotypes and Prejudicial Attitudes toward Arab Muslims.” Analyses of Social Issues and Public Policy 17, no. 1: 60-83.

Renee, Shana. 2017. “Ibtihaj Muhammad on getting her own Barbie doll land the power of inclusion.” ESPN. Accessed December 12, 2018. www.espn.com/espnw/culture/article/21405704/ibtihaj-muhammad-getting-own-barbie-doll-power-inclusion