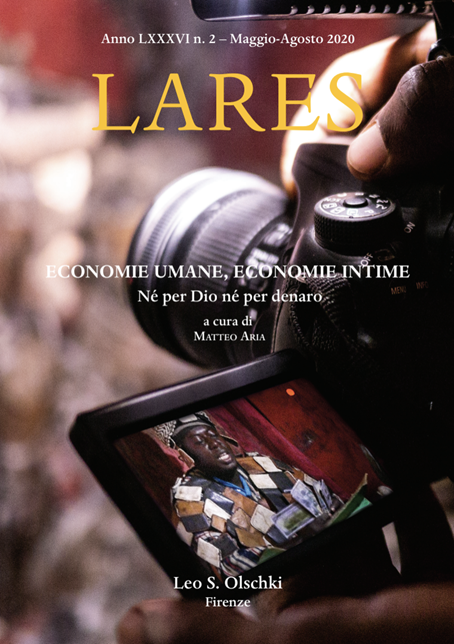 Intimate and Human: a new special issue on Economy and Religion

In the last couple of years, I have been part of a conversation about the nexus between religion and economy. It aimed to critically question the prominence of economics as the best suited discipline to study how people deal with value and its circulation. It was an attempt that wanted to explore the centrality of religious forms in social life whilst avoiding reducing people’s choice to mere economic reason. The first occasion of discussion was a workshop, held in Rome in May 2019, in which recent theories from the fields of economic anthropology and religious studies were put in dialogue to explore the connections, and the overlaps, between classic objects of study like exchange, commodities and market with those of magic, witchcraft and religion.

As a PhD candidate in religious studies, who has been trained as an anthropologist, I was intrigued to share thoughts with scholars who work in the two fields and were open to explore the overlaps of their research topics and push forward disciplinary boundaries. This was part of a project that wanted to engage with classic figures of 20th century thought, like Marcel Mauss and Georges Bataille, and dialogue with more recent theories of communal life, such as David Graeber’s concept of “everyday communism”. In addition, the propositions of the material approach to the study of religion were mobilized to question previous academic assumptions about what religious phenomena are supposed to be made of.
Two years later, after a complicated trajectory in which scholars based in Ghana, Italy and the Netherlands met and shared their work, a first output found form as a special issue for Lares, an Italian language journal.

Titled “Economie Intime, Economie Umane: ne’ per Dio ne’ per denaro” / “Intimate Economies, Human Economies: neither for God nor for money” (available for purchase), the publication brings together scholars trained in anthropology, religious studies and social history in the aim to critically address epistemological boundaries and better grasp the complexities of human coexistence. Featuring contributions of some of the Religious Matters’ members, the collection of papers is unfortunately mostly in Italian, with some papers in English (Geschiere, Hart, Ntewusu) and others appearing as translation into Italian. Among them, Birgit Meyer’s article “Frontier Zone and the Study of Religion”, previously published in English (english version here), and Joe Trapido’s “Love and Money”, a translation of a chapter from his monograph “Breaking Rocks: Music, Ideology and Economic Collapse, from Paris to Kinshasa” (2016, available for Berghahn Books).

In the publication, the modern division of social life into separate spheres — such as economic, political, religious — is scrutinized in the attempt to adopt a perspective that takes into consideration the entanglements and the intricacies of human matters. As the authors (Aria, Draicchio, Gentilucci, Grossi) explain in the introduction — available only in Italian — in spite of many critiques, ideas like the centrality of the market and the autonomy of economy from moral and political reason still play a major role in how social life is thought and policies are made. Countering these discontinuist approaches, the authors advocate for the necessity to keep together the religious and the economic as an effective methodology to face a world increasingly engrossed by enclosures, identitarian claims and necropolitical tendencies. This has a twofold implication: to think of religious life beyond the issue of secularism in order to assert its resourceful qualities in the variety of human matters; to include within the understanding of economy not just impersonal and abstract transactions but also the wide spectrum of human relations: from kinship to friendship, from conviviality to desires and resentful forces like envy and jealousy. What the anthropologist Keith Hart called “human economy” occupies a central position in guiding this reflection and his own paper “Human Economy as a Religious Project” (link) aims to put forward a proposal that bridges the connective capacity of economy with the mobilizing forces of religion. In the words of Hart, this is a pragmatic way to imagine and build a society that continues on the unfinished project of liberation embodied by the anti-colonial revolutionary thinkers: W.E.B. Du Bois, C.L.R. James, Frantz Fanon, Mohandas K. Gandhi.

Across the papers, conviviality and human relationships are taken as central threads to unpack and explore how coexistence is achieved, maintained or undermined. The papers touch upon a variety of geographical areas (Africa, Europe, Oceania) using ethnographic and historical analysis while pushing further the theoretical reflections on foundational aspects of the disciplines — gift economies, money and exchange, secularism and religious forms — with an attention to the pragmatics of living together. Noting how an enduring belief in the fundamental opposition between commercial and communitarian values is still very influential in both academic and public discourse, the articles present a less oppositional reading of how humans relate to each other. A look at some of the papers can exemplify the issues at stake.

Samuel Ntewusu’s piece in English (pdf here) “Co-existence in Turbulent Times: Migrants and the Making of Ghana’s Madina”, presents an historical reconstruction of the dynamics between natives and settlers in the area of Madina, in present day Accra, Ghana. Retracing the history of the Ghanaian capital city, Ntewusu is able to shed light on the complex processes of sovereignty amidst internal migration and colonization while also highlighting the politico-economic influence of the spiritual domain. These are forces at play that profoundly structured the ways people live together in Madina, from pre-colonial times until today. Indeed, it is in such historical ground that present-day coexistence of people of different religious backgrounds in Madina gets articulated.

Working on the need to overcome the divisions that still affect modern academia, the contribution of Peter Geschiere walks through his personal and academic path that started in the Maka region, Cameroon, in the 1970s. In the paper he offers a wide reflection on the epistemological value of witchcraft and the occult to understand modern capitalism. In the ambiguous territory of spiritual attacks he finds an interesting key to reflect on the ways capitalism works by articulating a heterogeneity of elements of different provenance, sorcery being one of them. On the other hand, he also shows how witchcraft, far from being an outmoded thinking, is able to express and link up with capitalist modes of accumulation. The power of witchcraft appears to be a strong force that mobilizes people and goods in the expansive world market Cameroonians have to deal with. Geschiere takes the chance to alert the readers to the work of the anthropologist Joseph Tonda, especially about his recent book, “L’impérialisme postcolonial – Critique de la société des éblouissements” (Karthala, 2015). In this monograph Tonda explains how the African mode of dealing with multiple realities and the co-existence of different levels of signification can offer guidance to a Western world bedazzled by fake news, digital media and alternative truths.

In Joe Trapido’s paper, all too easy assumptions about the immorality of money are unpacked through the ethnographic account of Congolese popular songs and the love economy that sustains their creation. With singers receiving donations from powerful patrons who want to dedicate songs to their lover, money is a signifier of sincerity and dedication. To reflect on this setting, Trapido faces a quite prominent stream of the Western ideological thought that has associated love with a series of dichotomies. He notes how the supposed opposition between love and money stands next to a series of moralized divisions like individualism and kinship, reason and sentiment, domestic and public, gifts and commodities. Through the activities of patrons, lovers and music composers the Congolese setting of Kinshasa helps us to question such enduring universalistic claims. In addition, it demonstrates that love and economy are not mutually exclusive but sustain each other in the broad range of relationships that make society at large.

On similar notes, the article by Cecilia Draicchio follows the money along the circulation of pharmaceutical drugs in an in-between territory where psychiatry and spiritual healing meet. She introduces the dynamics of Charismatic prayer camps in rural Western Ghana where religion and biomedicine share the same ground in the attempt to deal with patients affected by mental disorders. Here, the nurses from a nearby hospital that try to popularize and sell psychotropic drugs have become habitual visitors of the prayer camps. In this context, for Draicchio the role of money has to be reframed and must be seen in the double role of both a facilitator of connections — among people and the nurses who try to sell the drugs — and creator of divisions — between people who can and cannot afford to buy the pharmacological products. This is why the author advocates against the adoption of one-sided readings that separate biomedicine from religious, formal from informal, gift from market and “the good” from “the suffering”.

The rest of the papers (Tcherkézoff, Gentilucci, Grossi) similarly act as reminders of the need to be suspicious of well-established moral and divisionary stances. All the authors agree in assessing the importance of identifying the historical roots of economy and religion, at the same time recognizing them as fields of human activity entrenched in other domains of life. Overall, the human and intimate side of economy and religion appear to be a primal field of inquiry to study coexistence and its generative frictions. The range of theoretical reflections and ethnographic cases collected in this special issue is a first step in this direction.