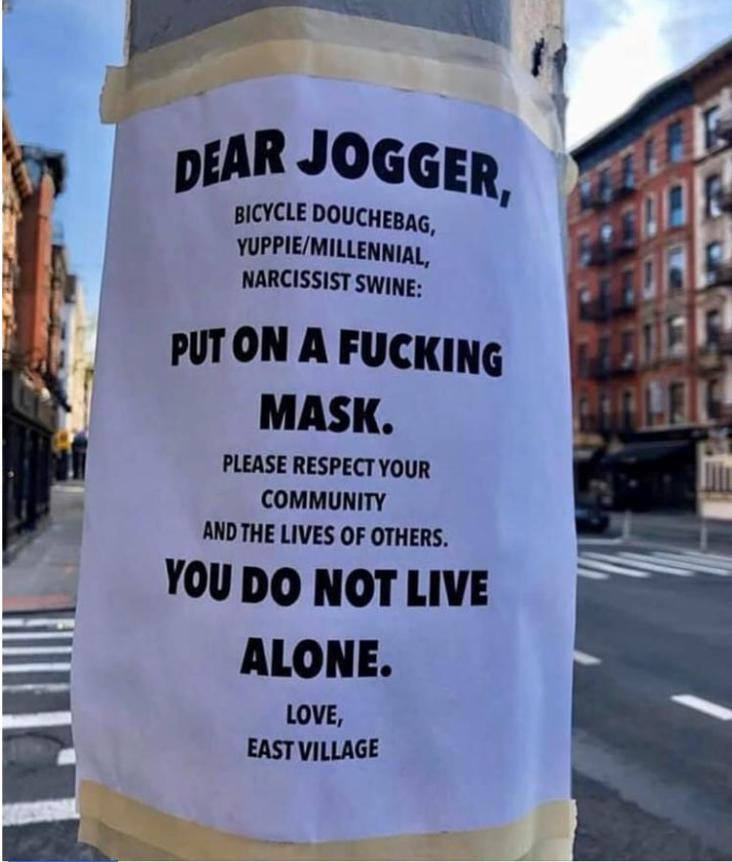 Masks in the Time of Coronavirus

Where do you wear a mask to protect yourself from contagion?

Do you wear one in the house, sitting at home, watching streaming videos on television?  Or only when you go outside in short, tactical bursts to get exercise for the day?  Maybe you only wear it inside supermarkets and grocery stores.  For some, wearing a mask on the street or in a park feels excessive, the insistence on continual covering a little ridiculous.  Others see it as obligatory, something you owe to yourself and to your community at large.  Perhaps in your country the state has stepped in on this issue compelling their use while other states relegate that decision to regional governments or to individuals themselves.

In all of these situations we are adjudicating air.

If you do not wear a mask in the home but wear one outside you have adjudicated that outside air is more threatening to you than inside air.  Five weeks ago, and perhaps for an entire lifetime for some of us, air was simply the medium through which we move, the elemental media that makes human life possible.  It lay in the background, unthought about, unnoticed, save for those places (increasing in number) where pollution forced it into consciousness and public discussion.  But now all of us adjudicate air everyday, make assessments as to its threat, watchfully eye others who express air and try to keep a correct distance away from them.  We wonder just how far that expulsion (and the droplets contained within) can travel.  There we are, calculating, assessing, worrying, as to how air operates, what it is made of, how this condition of life is becoming a condition of death.

We breath air but we also see through it, feel its presence on our skin.  It is a medium through which we move, hear, and see.  And as a medium it is not just transitory (something in the middle that mediates between two other elements) but is environmental.  It holds things.  A virus, unlike bacteria, cannot live by itself but must exist within some medium or another.  Water droplets carry the virus just as air carries water droplets.  Air is a container as much as a medium of transmission.

Masks have always performed a double function.  They conceal and hide, they display and reveal.  Traditionally, they possessed religious and ontological functions, transforming the wearer from human to spirit.  They are ambivalent, both a source of protection and a threat, an ambivalence explored in detail in the recent television series Watchmen (Damon Lindelof 2019). In recent years their use has proliferated as face coverings have become increasingly prevalent across the world.  In France and elsewhere they have been defined as threats as the mask function of burqas and niqabs became defined as a security threat and as a form of repression, supposedly extinguishing the possibility of individual self-expression that liberalism rests upon.  Conversely, they have become icons of resistance, used in Hong Kong to resist facial recognition technologies from an authoritarian government.  In Australia and California they are used to filter smoke from wildfires, in Delhi and Beijing, to ameliorate pollution.  Countries now fight over securing masks the way they once fought over oil and other precious minerals, and spy services such as Mossad are deployed to secure masks and other protective equipment.  Masks are everywhere and where they are not they are fought over.  It becomes harder for their use to be stereotyped as a peculiarity of Asian countries, condescended to by Western observers.  Now we are all wearing them.

But while masks are a geopolitical issue they also operate at far more basic levels.  Masks now are not so much about revealing or concealing as they are about processing a distinction between inside and outside.  They are both barrier and switch, brokering between the medium of air and the medium of the body.   We worry about their porosity, that they might not be able to follow through on this promise of separating self from environment.  Air is ambivalent because it is a medium of mediums.  It is technologized, carrying within it a host of man-made things: toxins, heavy metals, viruses.  When we breathe these in we take that which is outside inside and incorporate into our bodies themselves transmuting that which is external to that which is internal, that which is other to that which is self.  Air, as Eva Horn has noted, is at once atmosphere, elemental medium, and interface.

Peter Sloterdijk sees the rise of the gas mask as producing mini privatized airspaces, disconnecting a private space from a broader environment.  Even our more porous masks perform this function as we use it both to protect us from the environment outside and to prevent our own environment contaminating the external one.  It makes each person walking our parks and streets an ambulatory mini-climate provided by the medium of the mask.

Masks are complex objects that animate some of our most basic needs and drives – fear, desire, protection, worship, group identity, and individual distinction.  They are deeply social, and in the age of coronavirus increasingly more so, as their use or their absence, brings to visibility the obligations individuals owe to family, community and state, making these obligations topics of political debate.  Put your fucking mask on, the sign tells us as it disciplines our use of this apparatus, training us as citizens.  Respect the lives of others.  Live up to community responsibility.  The mask isolates, individualizes, and disconnects us from a shared milieu with others.  But, as the sign says – in bold, all caps – the mask ultimately declares YOU DO NOT LIVE ALONE.

With thanks to my spring 2020 graduate class on the Poetics and Politics of Infrastructure (Columbia University, Barnard College) with whom these and other ideas were discussed, most particularly, Sarah Bevin, Ankush Bhuyan and Maur Dessauvage who curated our class conversation on masks.