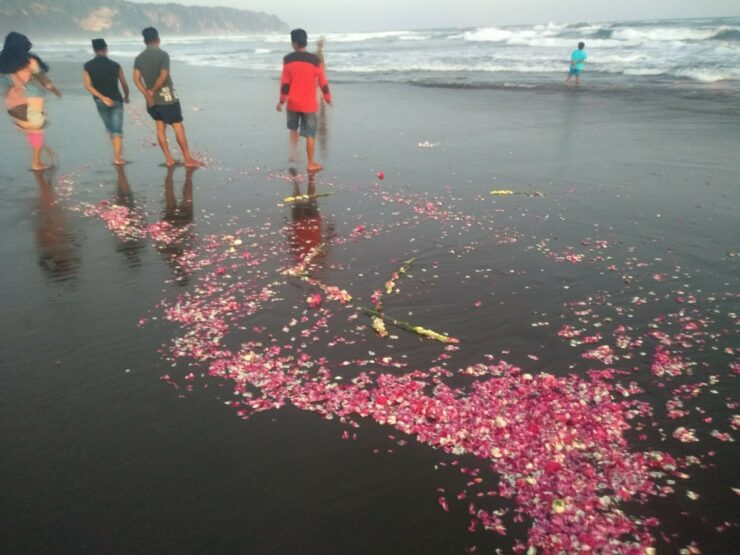 Queen of the Ocean

At Parangkusumo, a village in southern Java, Indonesia, many people bring offerings to the spirit queen who dwells under the waves there. I once asked one of the regulars on the beach why. He said: “one can walk to the next village, but if one takes the motorbike, the journey will be much quicker and easier.” The rituals to Ratu Kidul, the Queen of the South, that people performed on this beach, worked in the same way. They could provide speed and ease to whatever you asked. The spirit queen beneath the waves could make life easier. This man extolling the virtues and powers of this sea goddess and of meditating here on the beach for mystical insights, was a Muslim.

Shrine to the Sea Spirit

Parangkusumo lies on the southern coast of central Java, Indonesia. Just shy of the beach itself two black stones jut out from the ground. These stones, encased by white walls and old stories, are said to be the site of an ancient tale at the heart of the history of central Java. Here, the founder of the central Javanese dynasties met Ratu Kidul, the green-clad Queen of the South, who lives in an underwater palace. He took her as his wife and with her favour subjugated his rivals. Five hundred years later, his descendants still throne in the palaces of Yogyakarta and Surakarta. Today, the park enclosing the stones, the Cepuri, is a pilgrimage site, attracting dozens of supplicants every day, and bustling with hundreds of them on specific auspicious days. They bring offerings of flowers, foodstuffs, and incense to the stones and to the waves—to the Queen, asking for blessings and ease in their lives. They speak of the Queen in hushed, reverent tones, or do not speak of her at all, gesturing towards the sea and letting sentences trail off when they mean her. They pray and meditate, in the enclosure with their hands touching the stones, or on the beach, facing the sea. They take bottles of sea water with them for its power, swaddled in white cloth. And almost all of them are Muslim.

The religion of the Javanese is generally the Mohammedan, though mixed with much superstition, derived from the old heathen religion… (1800, 4)

Van Hogendorp and his contemporaries perceived that the Javanese were engaging in two religions at the same time, yielding a mixture of sorts. Their explanation for the occurrence of this mixture was that the Javanese were lazy or ignorant Muslims. This is a well-worn colonial racist stereotype. But, remarkably, at its core their perception is identical to contemporary characterizations of Javanese religiosity as “syncretic,” “hybrid,” “bricolage,” “multiple religious belonging,” “synthesis,” et cetera. These terms all imply a multiplicity where the default would be singularity. The inescapable implication is that these Muslims are not entirely or straightforwardly Muslim. These terms, many of them broadly accepted, reproduce a colonial understanding that plays into colonial stereotypes. But none of the pilgrims to the Queen see their own religiosity in this way. Nor does it seem right to continue using concepts that have such problematic implications. So, for my thesis project, I went to Parangkusumo and talked to the people who bring these offerings. This blogpost summarizes one aspect of this thesis.

To paraphrase the most common sentiment among pilgrims when asked after their religion: “what’s that got to do with anything?” Their Islam (and less common, their Catholicism, Protestantism, Hinduism) is entirely unrelated to the offerings they bring to the sea spirit. It does not register as agama (religion), but as one of its many conceptual opposites (culture, tradition, custom). For those who bring offerings to the Queen, this is not religious, and yet it is seen as an example of religious hybridity by western observers. Clearly, there is a fundamental miscommunication occurring here. How can this be solved?

Practitioners often use two metaphors for religion (agama) that could shed some light on what is happening here. The first is “religions are like clothes.” When I put on different clothes, I do not become a different person. In the same way, while religions are outwardly different, they are inwardly the same. The word “hybridity” implies religious multiplicity – one might even argue that it implies multiplicity where one would expect singularity. It implies surprise: these people seem to engage in multiple religions, which surprises us because it only makes sense to engage in one. But, if all religions are only outwardly different and inwardly the same – like I am though I wear different clothes – then all multiplicity is only an apparent multiplicity. Different religions are actually singular beneath their outward appearance. From the perspective expressed through the clothes metaphor, the notion of “religious hybridity” has no meaning.

The second metaphor employed evokes an idea of religion as being “like a bridge,” serving as an instrument. When religion is seen as a system of truth claims, as a mainstream western concept of religion maintains, two religions are incompatible structures of statements; one religion holds that “all dogs have fleas” and the other that “no dogs have fleas.” These statements cannot both be true. If we take religion as a system of truth claims, people who (appear to) engage in two religions would say that all dogs are simultaneously ridden with fleas and blessedly free of them – an impossible statement. Such a statement is unintelligible and unexpected, and as such receives the label “syncretism”. But if religion is not seen as statement, but as a tool, multiplicity becomes intelligible. Instead of incompatible statements, Christianity and Islam might be seen as a boat and a bridge. While the boat and the bridge are clearly not the same, they will both get you across the river. There is nothing mind-boggling about taking the boat one day and the bridge the next. From the perspective expressed in this metaphor, it is also unremarkable to engage in rituals or techniques from one religion one day and those from another the next.

The rituals to the Queen, then, are like taking the motorbike, as the man on the beach I quoted earlier said. As with the motorbike, you could go without; take the long walk to the next village. But why bother, when you can get to your goal easier and faster? This analogy shows that the rituals to the Queen are understood like a tool, available to people regardless of their religious identification. First and foremost, these rituals are meant to produce some effect: they are approached because of their efficacy.

In 1960, Clifford Geertz wrote of this stratum of Javanese religiosity: “He says: ‘Many are the ways.’” He characterized this as tolerance in religious beliefs (1960, 127). But that’s missing the point: it precisely isn’t about beliefs. It’s about ways. The Queen and her rituals aren’t registered as beliefs. They are ways, effective tools, of which the most important aspect isn’t whether they “are” Islamic or not, but whether one uses them in an Islamic way. So practitioners might perform ablutions in the nearby mosque before bringing the offerings to the stones, they might open with the bismillah before speaking to the Queen, they might incorporate ritual elements from Sufi shrines. If they are Catholic, they are likely to hold rosaries or cross themselves during the offerings. This is not “dressing up” these rituals as something else than what they are, nor is it about “mixing” two distinct religions. It is about using the power that is there in a responsible way, in accordance with one’s religion. It is not about believing correct statements, but about wielding a tool correctly.

So actually, the religiosity of Muslims who bring offerings to the Queen of the South is not “hybrid” in any sense of the word. It only appears that way when observers insist on viewing the situation through different conceptualizations than their own.

The “hybridity” of this type of Javanese religiosity isn’t a combination of religions, but rather a difference in how religion is experienced. In fact, Van den Boogert (2015) suggests that it might be a difference of how knowledge itself is experienced. Instead of theoretical knowledge, the guiding principle for practitioners is practical knowledge. Where in the western mainstream paradigm “knowledge” is first and foremost correct knowledge (all dogs have fleas or no dogs have fleas), for practitioners of the Queen rituals, “knowledge” is first and foremost effective knowledge (a tool alongside other tools). In other words, the rituals brought to the Queen should not be understood as clashing with Islam because in this setting, from the angle of the practitioners, there is no possibility that they can clash. Reformist Muslims disagree, because they take Islam as a much more exclusionary category. What’s more important, however, is that without developing a conceptual alternative to hybridity, as I have tried to do, scholars have no way but to implicitly agree with reformists. And this does not do justice to those who visit the sites of the Queen, who are sincere and informed in their Islam as they practice these rituals. This becomes even more obvious when we see how many Muslims directly relate the Queen to God, and view her as a conduit for his blessings. The Queen of the South rituals supplement Islamic practices, and take place in a wider Islamic cosmology, and are almost invariably performed in an Islamic way.

Marius Koelink studied Religious Studies and English Language and Culture at the Radboud University. For his master thesis at Utrecht University he researched Javanese religious practices in relation to the notion of religious hybridity. His academic interests center on conceptions of religion and non-religion, climate change and landscape, religion in Indonesia, material religion and ritual studies.

Geertz, Clifford. 1960. The Religion of Java. Chicago and London: University of Chicago Press.