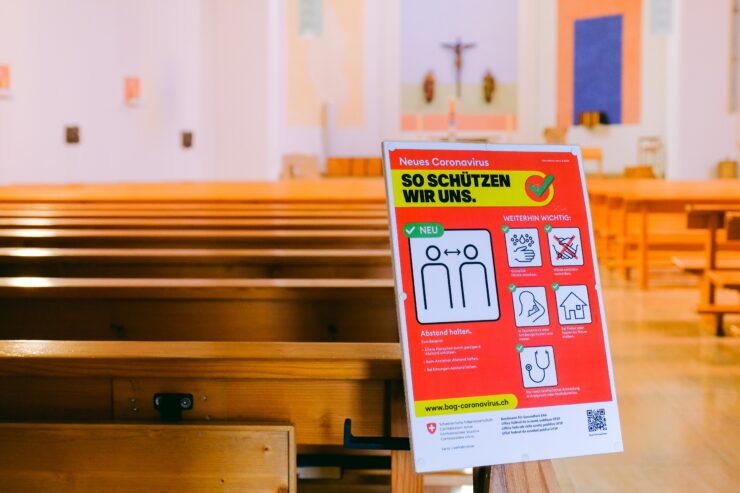 The Key Role of Religious Communities in the Covid-19 Pandemic

In a new study [1], together with Carolin Hillenbrand (WWU Münster), we analysed the role of religious actors in the Covid-19 pandemic. The background was that in the context of the Corona crisis, the media coverage of religious communities was often negative. Since, especially at the beginning of the pandemic, numerous worship services became superspreading events and several Evangelical, Islamistic and Orthodox groups refused to follow the global Corona rules given by the WHO, religious communities seemed to confirm rather their negative image within many secular European countries and were associated there even with conspiracy ideologies and hostility towards science. However, in our study, we found that such a one-sided perception does not fairly reproduce the at least ambivalent role of religious communities, which  indeed has also very positive impacts. Over time, the believers and representatives of most religious communities – whether Jews, Christians, Muslims, Hindus, Buddhists or other religious groups – realised the sincerity of the situation and made valuable contributions to the successful containment of the virus. Many religious groups also excelled in innovative hygiene concepts and self-initiatives that complemented the state rules in a meaningful way. In order to facilitate religious services face-to-face under the conditions of the pandemic, they relied on social distancing, compulsory masks and the provision of disinfectant, prenotification of attendance, limiting the number of attendees, no singing and further regulations. Additionally, many religious communities streamed their church services, taped them and transmitted them via different media such as radio, television or the internet. Finally, special religious ceremonies, nights of prayer as well as Covid-19 prayers were offered.

Apart from that, the involvement of religious actors in the fight against the Covid-19 pandemic was actually much easier than in previous health crises that were associated with a sexual-moral component such as HIV/AIDS. Precisely, it was less complicated for most religious actors to understand that the Coronavirus can affect anyone, regardless of the possible ‘sinfulness’ of one’s behaviour.

We also found that multi-faith initiatives such as Religions for Peace (RfP), the International Partnership for Religion and Development (PaRD), the Joint Learning Initiative on Local Faith Communities (JLI), in particular, proved to be positive forerunners in the fight against the global pandemic. Instead of being isolated and disconnected, many religious organisations and actors found (new) ways to work together. Supported by digitalisation and new social media, they were able to present themselves more strongly and better networked than in past crises.

Only the radical, fundamentalist branches of various denominations, which often fundamentally reject scientific knowledge and methods and tend to place the authority of religion above all other areas such as science and politics represented a permanent risk factor. Primarily, they lacked differentiated theological perspectives to find a balance between the dogma of faith and scientific knowledge, reason and emotion.

Covid-19 as a catalyst

The Covid-19 pandemic acted as a catalyst rather than being a cause for many social and political problems we were able to observe during the past eighteen months. The same is the case with regard to religious responses to the pandemic. Wherever religious identities have been instrumentalized in conflict situations before Corona, this was largely confirmed during the crisis. In India, for example, the traditional conflict between Hindus and Muslims was further fuelled by representatives of both religious communities accusing each other of being responsible for the spread of the virus. In Pakistan or Israel, where the activities of Islamists and ultra-orthodox Jews have long been virtually uncontrollable by the state, the same two groups have sometimes vehemently resisted compliance with distance and hygiene rules. In Brazil, the USA or Russia, it was the same religious currents – the Pentecostal churches, the Evangelicals or the Russian Orthodox Church – that had attracted attention in the past through their scepticism towards modern natural science. In the pandemic, they now had difficulty recognising the expertise of virologists and other experts.

It was far from a coincidence that the World Health Organisation (WHO) issued specific interim rules for religious communities and faith-based organisations (FBOs) at a relatively early stage of the pandemic on 7 April 2020, understanding that religious actors have a “major role” to play in saving lives and alleviating the suffering of sick and infected people. Accordingly, the WHO not only recognised religious communities as “the primary source of support, comfort, guidance, direct health care and social service”, but also identified them as the very groups that urgently needed to be integrated for a successful containment of the virus.

An important aspect of our study concerned the individual forms of belief. We assumed that certain forms of faith have a different impact on the perception and coping with the pandemic. Based on the statistical analysis of a survey on religiosity and Corona in the German population, we conclude that religious people do indeed develop positive religious coping strategies that help them to deal with uncertainties, burdens and stress and that induce positive emotions such as hope, optimism and energy. In our statistical analysis, we found that people tend to feel hope and optimism in times of Corona when they pray, attend religious services regularly and describe themselves as more likely to be religious. However, there is also negative religious coping, for example when people experience punishment, fear or guilt in relation to God. Then they tend not to be optimistic, but feel lonelier, more helpless and of course more fearful. It is also problematic when people see their religion as the only acceptable one and consider religion more important than science.

Particularly problematic in terms of perception, however, is belief in conspiracy myths. People with an affinity to conspiracy myths are on average significantly more likely to behave in an unsupportive manner and therefore to violate the rules of hygiene. The tendency towards conspiracy myths – including those about the Corona pandemic – often goes hand in hand with a lack of support for democracy, anti-Semitism and hostility towards Muslims.

The conspiracy mentality and its causes

Belief in conspiracy theories has a lot to do with people’s current circumstances and, above all, with their personality. The psychoanalyst Jürgen Körner states that people with a tendency towards conspiracy myths are people who do not like to passively accept their fate, but proactively attribute blame and responsibility to other, for example, secret powers (source). From a psychoanalytic perspective, this is an immature attempt to manage fear and gain control. The dangerous aspect of this is that such a reinterpretation of reality is part of an authoritarian syndrome in which devaluation and aggression towards strangers often play a role, as not only our study has found, but also recently a German study on right-wing-extremism revealed.

What can religious communities do?

Dissuading people from believing in conspiracy myths is a serious challenge, especially if they are not willing to accept support. On the one hand, it is of course important to confront conspiracy myths with facts and to set limits for these people. But it is also important to address the unconscious needs and fears of these people. This is often only possible with therapy and then only successful if someone is willing to engage in it. Religious communities cannot offer therapy, but they can contribute to overcoming people’s fears during the corona crisis by offering pastoral care. It is also helpful if medical professionals from within a religious community provide factual information about the situation and coping strategies. In addition, to regain at least some control over the situation, members of religious communities can be actively involved in designing hygiene measures and other relief measures. Such measures already exist in religious communities. In general, however, more important than intervention is prevention. There needs to be more investment in psychosocial health so that people acquire mental resilience from an early age. Here, too, religious communities as well as other civil society actors can make an important contribution.

Professor Dr Oliver Hidalgo is a political scientist and carries out research at the universities in Münster and Regensburg on issues related to political theory and the history of ideas, democratic theory, the relationship between politics and religion (focussing on the challenges of religious plurality in a democratic state under the rule of law), integration and populism. He is the spokesman for the Standing Group on Politics and Religion of the German Political Science Association (GPSA).

Dr Alexander Yendell is a sociologist and carries out research at the Leipzig Research Centre Global Dynamics in the fields of religious plurality, Islamophobia, antisemitism, right-wing extremism, racism, political protest, violence and social inequality. He is spokesman for the Section Sociology of Religion of the German Sociological Association.