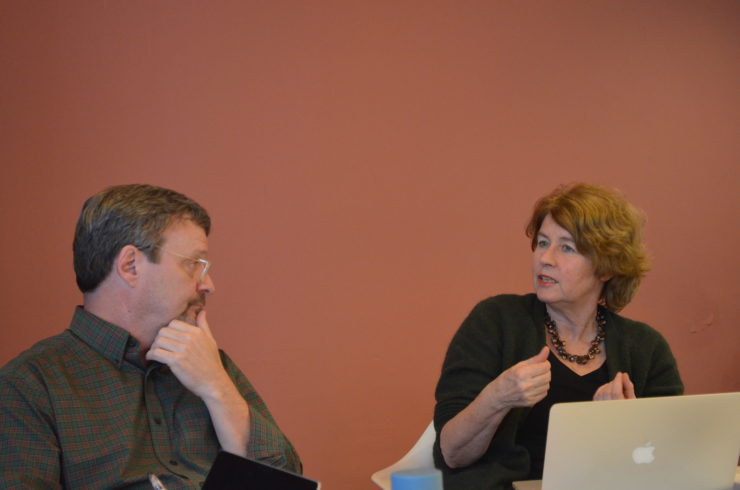 The Thing about Religion: interview with David Morgan

From 23-29 February 2020, David Morgan visited the Religious Matters program. In three stimulating sessions we discussed his forthcoming book manuscript The Thing About Religion (to appear with University of North Carolina Press). Birgit Meyer interviewed David Morgan about this book project after his return to Durham. In the meantime the arrival of the corona pandemic and the necessary measures taken to slow it down have disrupted our work. Normally we very much enjoy sharing time and space, and engaging in long and deep discussions. The pictures (see the visual impression below the interview) give a glimpse of that wonderful normality, which hopefully will return soon.

What kind of book is The Thing About Religion? Who are the intended readers?

This book’s first audience is undergraduates, though I do not intend that it be limited to them. I hope graduate students and many faculty in a variety of disciplines find the book’s consideration of the materiality of religions to be strongly relevant to their work. The idea for the book arose when I noticed year after year that graduate students in fields like anthropology, religious studies, and history joined my seminars on religious material culture with great interest in the topic, but little preparation for doing material analysis or familiarity with the literature on material religion. So it occurred to me that an accessible book that intervened earlier in their formation might help prepare students to undertake graduate study more productively.

What is the central “thing” you want to convey?

There are two important senses to the word ‘thing’ in English: the first is the common notion of material objects, and religions are full of them: objects, places, clothing, food. These are put to use in a great variety of ways in practices that make a religion a lived, felt world. A second sense of ‘thing’ pertains to something that is no less a feature of religions: whatever resists becoming an object by refusing to take a specifiable place within a taxonomy. In the face of this sort of thing, people ask, “what is that thing?” They search for a category to apply to it, but are left with only a partial fit, or none at all. Religions exhibit all kinds of mysterious elements that don’t fit—things that defy the customary forms of classification that organize the everyday world: spirits, ghosts, angels, premonitions, omens, forebodings, dread, dreams, visions, disasters, gods, and demons. There are names for these things, but the power they exert exceeds human control. Special means are required to engage these forces. So religious cultures develop what might be called sacred economies that regulate forms of exchange with them. These sacred economies commonly turn on material practices—from the use of amulets and sacred substances to rites of sacrifice, all of which are how religions can be said to happen materially.

How is the book structured?

The book opens with an introduction that identifies the agency in a broad range of religious examples as the starting point for understanding religions as material practice. The first three chapters explore several primary theories and conceptual definitions that structure the field of the material study of religions. Chapter one traces the history of ways of thinking about religions that have tended to de-materialize them. Chapter two follows with an assessment of recent and current theories of religion that are much friendlier to scrutinizing religious materiality. Chapter three examines seven different ways in which religions happen materially.

The second part of the book consists of three case studies that seek to show how religions should be studied as material practice. Chapter four presents a history of magic wands from the ancient world to the present, seeking to show how power objects such as the wand are part of webs or networks that empower them. Chapter five is a history of the site of Notre-Dame de Paris, from its Celtic origins and its Roman era to the long history of the Christian cathedral since then, and its place in contemporary France. Here the point is to document how much religious sites and objects change over time and how these long histories imbue things with power and value. Finally, chapter six follows indigenous artifacts gathered by Protestant missionaries in Polynesia, tracking them from their place of origin through many successive phases to their installation in museums in Boston and London. At each stage, the items were exhibited in different circumstances, tagged with an evolving nomenclature, and engaged quite differently. The history of their power and understanding changed with each step.

A conclusion tries to pull all of this together and an appendix offers students and their instructors several resources for using the book in the classroom—discussion questions, key terms, bibliography, internet sites, and a guide to writing about artifacts.

Why is “material religion” so important for you as a scholar? What difference does it make to study religion from a material angle?

The default for many people, particularly in Europe and North America, but not only there, is to define ‘religion’ as a system of beliefs derived from revealed scriptures. This is only part of what Christianity is, and considerably less, if anything at all, about what religions elsewhere and in human history have been. We need to broaden our framework to understand that religions are fundamentally embodied, material forms of practice in which the coordinates of social life such as gender, power, class, value, and social relations are defined and experienced in material terms. The shape of materiality is webs. Objects, spaces, and people are nodes within these webs that mediate the relations between individuals, groups, and entire networks. The crisis we are experiencing at present with the global pandemic of the coronavirus is a dramatic, and quite negative, example of the networked nature of human societies. Exploring how religions are material networks in their own right is an opportunity for scholars of material religion to contribute something important to the material study of society.

How do you see the relation between this book and our work in the Religious Matters program?

Religious Matters is an international laboratory at the cutting edge of the study of religions as material practice. I was very impressed by the diversity of scholarship at Utrecht and the creative, ambitious energy that is shared so collegially among members of this intellectual community. I benefitted from the generosity and critical acumen that the seminar members modeled in the productive discussion of my manuscript. It suggests to me that they and many others might put this book to good use. The anthropological emphasis on practice that is characteristic of the approach taken by Religious Matters is critically important, and the far-flung range of topics and the impressive level of critical thinking that I saw in Utrecht suggest that the material study of religions is going to flourish there. If my book can help make this happen, I would be delighted.

A visual impression of the seminar