On 15 January 2018 Johanneke Kroesbergen-Kamps defended her thesis “Speaking of Satan in Zambia. The persuasiveness of contemporary narratives about Satanism.” The defence was followed by a lively symposium with presentations by her, Elias Bongmba and Filip de Boeck, and a concluding panel with Annalisa Butticci, Rijk van Dijk, and Peter-Ben Smit (chair Birgit Meyer). The thesis generated a lot of public interest in the Dutch media:

(Text continues after the picture) 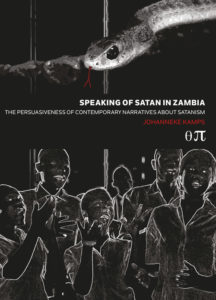 The following summary presents the main issue addressed by the dissertation:

According to an old English proverb, ‘Speak of the devil, and he appears.’ In contemporary Zambia, many people are speaking about Satan and his human agents, the Satanists. Satanism refers in Zambia to a supposed organization, headed by Satan, dedicated to bring evil and harm, especially to Christians. Ex-Satanists claim and/or experience a previous allegiance to this organization. Narratives about Satanism generally speak of sacrifices being made to Satan, often executed through road accidents, illnesses or spiritual means. These narratives are persuasive: they are spread and taken seriously. For some they are reason to see themselves or others as possible Satanists, in other cases they trigger violent reactions. This dissertation investigates what factors contribute to the persuasiveness of contemporary narratives about Satanism.

First, cultural conventions render a narrative plausible: Satanism can only be taken seriously if the stories that circulate about it are, to their audiences, imaginable. Satanism is part of a web of beliefs mediated through stories, connected to traditional Zambian notions about witchcraft, illicit accumulation, and possession. However, beliefs and traditions are not unchanging and fixed in the past. In Africa, local and transnational folk tales and systems of belief have been transformed and taken up into a global, Christian, narrative. Modern spiritual warfare theology serves as a framework for stories about Satanism.

For ex-Satanists, who give testimonies about their past in churches and other religious settings, narratives about Satanism do not merely describe a plausible reality; it is a reality that they have experienced for themselves. An investigation of the social settings in which stories about Satanism occur shows that Satanism is perceived as a diagnosis, rather than as a religious conviction. Factors that encourage a diagnosis of Satanism are youth, disturbing dreams, typical behaviour during deliverance, and, especially, feelings of rejection and isolation. Accepting the diagnosis of Satanism requires a reinterpretation of the past. For ex-Satanists, their involvement in Satanism gives meaning to negative experiences like the deaths of relatives, disasters and feelings of rejection and isolation. This makes the narratives persuasive on a personal level.

Pastors help the ex-Satanists to interpret their past in the context of Satanism, and encourage them to share their experiences. Pastors secure speaking arrangements for the ex-Satanists and add meaning to their narratives. This endorsement by pastors makes testimonies credible to their audience. For pastors, testimonies are significant because they give evidence of the theology of spiritual warfare and of the power of the pastor to deal with evil forces. Through the performance of the testimonies, the battle between God and the devil is made tangible for an audience.

Testimonies fuel the knowledge people have about the satanic realm and its intentions. Stories about Satanism are also shared as rumours and legends, and spread through radio trottoir. Rumours can inspire action, varying from spreading the rumour further to perpetrating violence against persons or property. Rumours about Satanism typically target five professions: politicians, businessmen, teachers, pastors, and government officials involved in development projects. These ‘usual suspects’ are connected to towns and urban worlds of meaning. In this urban world, extra-ordinary success still requires support from extra-ordinary powers. Satanism is the idiom in which concerns about illicit accumulation in an urban setting are expressed.

Changes and tensions in a society can explain why certain storylines and images in narratives suddenly become more or less popular. A close reading of testimonies of ex-Satanists gives an indication of tensions that are experienced in contemporary Zambian society. The tensions in the testimonies of ex-Satanists indicate where the gaps between expectations of modernity and lived reality are especially wide. Narratives about Satanism give meaning to the experience of disillusionment with modernity.

Kroesbergen-Kamps conducted the research for her thesis during her affiliation with Justo Mwale Theological University in de Zambian capital Lusaka, where she taught religious studies. Together with her husband Hermen Kroesbergen she spent six years in Zambia, their stay was sponsored by Kerk in Actie (kerk in actie). Here is a link their recently published book about their experiences in Zambia: link.