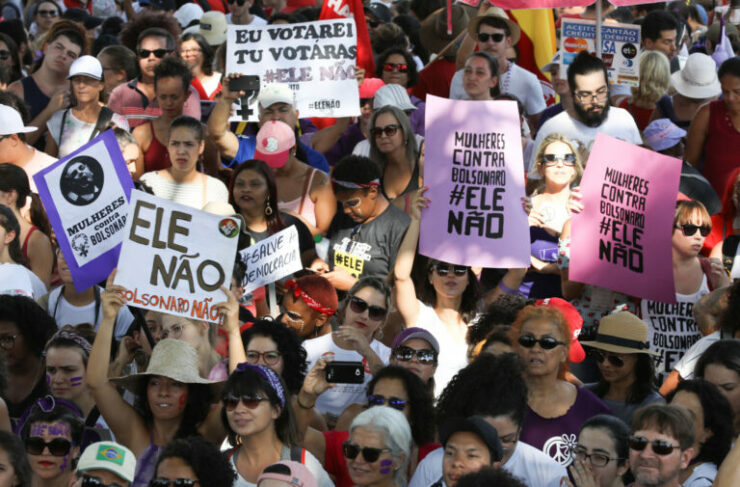 Brazil and Coronavirus: How Denialism, Religious Fundamentalism and Nectropolitics has Disproportionately Affected Women

Brazil is the second country in the world with the most infections and deaths from coronavirus, surpassed only by the United States. We have exceeded 100,000 deaths and 3 million infected and the numbers are increasing fast because we have a denialist president, who refuses to make a plan to contain the pandemic and who minimizes its severity; who, from the beginning, has stood against measures of social isolation and who has recently vetoed the mandatory use of face masks in public places. In fact, Bolsonaro claims to have been diagnosed with the coronavirus and at a recent meeting, he refused to wear a face mask and said that “masks are for sissies”.

Some cities have established a quarantine period, under the initiative of mayors and state governors who have stood up against Bolsonaro’s orders to keep everything running at any cost. Still, many people were unable to remain in social isolation because they need to go out to work, especially the poorest, who often live together with many people in a single room, without any access to water, without basic sanitation and without assistance. As for the gender gap, before the pandemic, women were already more than half of the total number of Brazilians living in poverty. 38 million people in Brazil are below the poverty line; of these, at least 27.2 million are black women. To make all of this even worse, Brazil didn’t have a Health Minister for more than 50 days.

The person temporarily in charge of the Ministry of Health right now, Eduardo Pazuello, is a military man who is not a doctor and who has already declared that he does not understand anything about medicine. Another determination of Bolsonaro’s government was that the numbers of dead and infected people by coronavirus should no longer be released, but Brazil’s Supreme Court ruled that the ministry should disclose these data again. Still, we believe that the numbers are much higher and there is underreporting.

This exceptional moment in our history is taking place under the rule of a fascist, denialist, misogynistic, homophobic president, who was elected without a government plan, based on a campaign built upon the spread of fake news. Jair Bolsonaro has already told a female fellow deputy that he would not rape her because she did not deserve it, in the sense that it would be an honor for her, and then he pushed her and called her a slut. He also said he would rather have a dead son than a gay son. His family is involved in militias, crimes of corruption and attacks on human rights defenders and journalists.

This president has among his most loyal base of supporters people who call for the return of the military dictatorship and fundamentalist evangelicals. In fact, since the beginning of the pandemic, religious leaders of evangelical mega-churches have also refused to close their places of worship, preaching divine healing and saying that the virus is the work of Satan. A bill created by the evangelical bench in the National Congress placed churches on the list of priority services, which allowed them to remain open.

As Simone de Beauvoir said once, any political, economic or religious crisis is enough for women’s rights to be questioned. And that’s what has been happening in Brazil. Since the beginning of the pandemic, bills to remove women’s rights to legal abortion, for example, have advanced in National Congress. In Brazil, abortion is allowed only if the woman’s been raped, if the pregnancy puts the woman’s life at risk, or in the case of anencephaly of the fetus. The current minister of Women, Family and Human Rights, Damares Alves, is a female evangelical pastor who has as one of her main aims to end legal abortion and pass a bill that intends to pay a small monthly salary to women who have children out of rape. Keep in mind a woman dies every seven hours in Brazil as a victim of femicide.

In the Ministry of Health, the Women’s Health Coordination team was fully exonerated a few weeks ago for having released a technical note that only reiterated that access to services for sexual and reproductive health was guaranteed by law in the midst of Covid-19. Bolsonaro posted a tweet repudiating the note, which he said was in support of abortion and that he was against it. The entire team was fired by the general who takes care of the ministry.

In March, when the first number of deaths by Covid-19 began to emerge, the largest service center for female survivors of rape and domestic violence, a reference center in Brazil located inside a hospital in São Paulo, which is one of the few in the whole country that provides dignified care to female survivors of rape and allows them to have access to legal abortion, was closed down to make way for a coronavirus screening space. But the hospital is huge and there would not have been any need for this service to be imposed exactly there. After many protests and denouncements, the service for female survivors of rape and domestic violence was resumed. The numbers of victims of domestic violence have also been increasing in cities that have established social isolation. In São Paulo, records of violence against women increased by 30% in March alone. In Rio de Janeiro, it was 50%. We know that these numbers are underreported and that the services for protecting women are even more deficient now than it has ever been.

At the front line of the coronavirus, women occupy 85% of jobs in the nursing sector and nursing technicians. Over 92% of domestic workers are also women; 70% of them do not have a formal work contract. Women are overwhelmed, whether they are locked up with their children, at home alone, supplementing their paid labor with even more unpaid domestic labor, or whether they need to go out to work and have no one to leave their children with. We journalists have been harassed and threatened by the president, his family and his followers. We feminists, academics and activists are the greatest enemy of this government. Many have already left the country because they have been the subject of death threats. Many of us who remain in Brazil are still suffering from these threats.

But we who are still here have tried to organize ourselves to monitor the bills and setbacks, to demand public policy and sometimes we have achieved some victories such as the return of the operation of the care center for survivors of sexual violence in São Paulo. But the truth is that everything is happening so violently and so fast in Brazil that it is not possible to predict what will happen post-pandemic. Brazilian universities have also been jeopardized with cuts in research grants, cuts in funding and scrapping programmed by the government. Now we have a new Minister of Education who is also an evangelical pastor and who declared that what is learned in Brazilian universities is “sex without limits”.

The more general predictions for Brazil are anything but optimistic. It is possible that the government will become more and more aligned with its support base, which are the military, the conservatives and the fundamentalist evangelicals, and, therefore, will become increasingly violent and oppressive towards women, feminists, academics, journalists, LGBT people, and minorities. But we will be the resistance for as long as we can. And strengthening support networks and the transnational dialogue between all of us is the only way to face this wave of conservatism, fascism and religious fundamentalism that is rising and threatens democracy in Brazil, Latin America and other countries in the world.

First published on TRAFO on August 13th, 2020, this article is part of the #DossierCorona thread #TransnationalFeminisms, which emerges from the online series “Transnational Feminist Dialogues in Times of Corona Crisis” organized by the Margherita von Brentano Center for Gender Studies at Freie Universität Berlin in cooperation with the MA Program Gender, Intersectionality and Politics at FU Berlin, Academy in Exile and Academics for Peace Germany.

Andrea Dip is special reporter and editor at Agência Pública of Investigative Journalism in Brazil. Andrea has worked with journalism focused on human rights since 2001 and is mentioned as one of the most awarded journalists in Brazil by O Globo, with 7 awards in human’s rights journalism. She is also a visiting scholar for the idealization and realization of the course “Investigative Journalism” at “Espaço Cult” and investigates the advance of religious fundamentalism in Latin America since 2015. In 2018, Andrea published her first book “Em nome de quem? A bancada evangélica e seu projeto de poder” (In whose name? The Evangelical Political Bench and Its Power Project) – currently in its 2nd edition – and co-directed the documentary “Under Constant Threat” about women’s occupation on the public space. Andrea Dip is also a Cosecha Roja fellow editor in Narrative, Gender, Violence and Youth.

Coming up: a blog by Clayton Guerreiro and Ronaldo de Almeida on churches in times of pandemics.