Skip to content
Religious Matters » Blogs » ”Coronavirus is a Ghost of the West”: Conspiratorial Explanations of the Covid-19 Pandemic among some Religious Leaders in Nigeria
Twitter 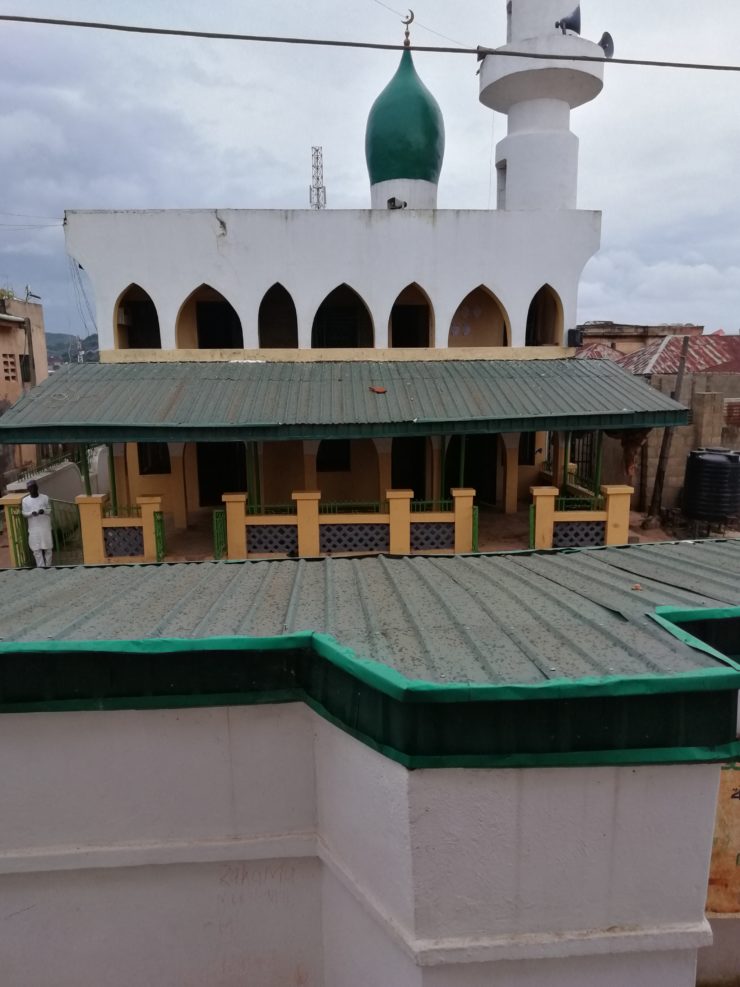 ”Coronavirus is a Ghost of the West”: Conspiratorial Explanations of the Covid-19 Pandemic among some Religious Leaders in Nigeria

The outbreak of the COVID-19 pandemic has plunged the entire world into a serious crisis with a far-reaching socio-economic impact that is unprecedented in recent history. When the coronavirus infection rate began to rise in Nigeria, several state governments enacted social distancing regulations that included the total lockdown of major cities and restrictions on religious congregations. The majority of religious leaders and organizations do not downplay the reality of the pandemic and are complying with the social distancing regulations. However, Sheikh Sani Yahaya (leader of the Islamic reform movement Izala) and Pastor Chris Oyakhilome (founder and leader of the Pentecostal church Christ Embassy) both subscribe to and are promoting conspiracy theories on the Coronavirus, and have criticized the government for suspending mass religious activities. Both Izala and Christ Embassy have millions of followers across Nigeria and wider Africa.

In the midst of the Coronavirus confusion, Sheikh Sani Yahaya, in several sermons and press conferences, has declared the Coronavirus a farce, maliciously created by some secret Western agents in order to prevent Muslims from performing their religious obligations such as pilgrimage, congregational prayers, preaching and handshakes. He has stated that the Coronavirus is a ghost of the West (meaning that it is an illusion fabricated and spread by the West). To prove his point, Sani Yahaya has highlighted that the virus was foretold in a 1981 novel titled The Eyes of Darkness written by Dean R. Koontz. Sometime later, Sani Yahaya and some of his followers also pointed to several dystopian movies featuring global pandemics, such as Outbreak (1995), I am Legend (2007) and Contagion (2011), as evidence of his claim that the Coronavirus is a premeditated conspiracy.

Pastor Chris Oyakhilome subscribes to a conspiracy theory that unites misapprehensions about 5G technology and the Coronavirus. Several variations of this theory are currently being promoted by different individuals and groups worldwide, though the common feature revolves around the accusation that the world’s governments, media corporations and scientific experts are masterminding a ‘new world order’ through 5G technology. Pastor Oyakhilome has added his own variant of religious coloring to the Coronavirus-5G conspiracy theory. In one of his online sermons published on YouTube on April 8, 2020, Oyakhilome stated that both the Coronavirus and 5G technology are the product of satanic secret agent Illuminati, with the aim of transforming mankind into a hybrid of human and machine. According to Oyakhilome, these satanic agents will soon introduce a COVID-19 vaccine which will actually be a serum filled with nano-microchips that will be introduced into the human body. These microchips, which will be controlled via 5G technology, are designed to read and influence human thought, undermine human agency and free will, and force people to worship Satan instead of God. He has further stated that the federal government lockdown of Abuja and Lagos is in fact intended to allow the secret installation of 5G antennas and other equipment. Pastor Oyakhilome has maintained that the microchips that will be injected into human bodies are the ‘mark of the beast,’ as foretold in the Book of Revelation of the New Testament. To prove his theory, Pastor Oyakhilome asked his audience to watch the dystopian Hollywood film Divergent (2014), which deals with the theme of mind control through a serum infused into the human body. However, it is important to note that the vast of members of the two groups do not watch these films.

Sheikh Sani Yahaya and Pastor Oyakhilome have each taken existing conspiracy theories about COVID-19 to build their own distinct theories, polished with religious elements. However, the two are strikingly similar in that they both point to Hollywood films as evidence of their claims. The question here is why these leaders use such films to defend their theories? My take in this case is that there is a certain affinity that connects the Coronavirus, pandemic/dystopian films and conspiracy theories.

The Coronavirus lends itself to conspiracy theories because while it has had a devastating impact on the global community, many people find it difficult to reduce the global human suffering unleashed by the virus to a mere blind natural happenstance. Even though certain forms of agency could be ascribed to the virus in terms of functionality, the virus itself has no intentionality or moral responsibility. This situation eliminates any notion of meaning in the destructive action of the Coronavirus. In order to make sense of the dire situation, some people have rushed to ascribe meaning to the pandemic in the form of conspiracy theories. Even though some Islamic and Christian religious leaders have criticized Sheikh Sani Yahaya and Pastor Oyakhilome for subscribing to conspiracy theories – such as Mathew Ashimolowo and Dr Mansur Sokoto – religious leaders do nevertheless assign meaning to and responsibility for the pandemic by attributing divine intentionality in the origin of the virus. These leaders often portray the pandemic as the wrath of God visited upon human beings because of their sins and transgressions. Despite the fact that those critical of Sani Yahaya and Pastor Oyakhilome do not reject modern biomedicine and its role in tackling the virus, they nonetheless proffer prayers as the ultimate panacea for the pandemic.

Furthermore, it is important to note that films are not simply false or fictional audio-visual narratives, but rather complex works of art designed to touch and hook viewers to the screen till the end of the show. When certain scenes in a film coincide with spectators’ lived experiences, flashes of recognition occur, which usually elicit an emotional response and excitement. As Birgit Meyer has stated in the context of the Ghanaian film industry and its relation to Christianity, “the success or failure of a movie for spectators depended on the capacity of filmmakers to mediate everyday experiences in such a way that the movie incited recognition by and participation of the audiences” (2015:142). The recognition in this instance happens when the watching of a film occurs after the lived experience. However, I suggest that when lived experiences follow or mimic what is seen in a film, then this sense of recognition is transformed into one of prediction, with the concomitant emotion and excitement. In the case of the Coronavirus and already-existing dystopian/pandemic movies, these films are assumed to have predicted current lived experience.

To many people, this prediction comes as a marvelous coincidence. Probably it is this sense of surprise that prompted many people around the world to voraciously consume existing films about pandemics when the coronavirus became a global phenomenon. For several weeks in February and March of this year, the 1995 US American pandemic film Outbreak topped the charts of the most-streamed movies on Netflix (though Netflix has minimal presence in Nigeria). For some observers such as Sheikh Sani Yahaya and Pastor Oyakhilome, the convergences between the coronavirus outbreak and these pandemic/dystopian films are beyond coincidence; there must be a sinister conspiracy behind the marvelous similarities.

The empty post-apocalyptic cities and spaces of dystopian movies bear eerie similarities to present day emptied cities in total lockdown due to the coronavirus pandemic. Francis Lawrence, who directed the Hollywood film I am Legend (2007),in which a deadly virus wipes out 90 percent of the human population, stated upon the film’s release that “there is something magical about the empty city” (Jensen 2017). To many people experiencing these empty lockdown cities today, this magic certainly entices the imagination and quickly triggers recollections of the post-apocalyptic spaces of dystopian films. Many international news channels such as CNN and TRT World have featured images of pre-lockdown cityscapes in different part of the world – filled with people and automobiles and shrouded in a polluted hazy – alongside images of the same cityscapes under coronavirus lockdown – empty, with clear skies, and in some cases with public spaces re-occupied by wild animals. These evocative pictures present an alternative vision of modern cityscapes devoid of human bodies and pollution, which could evoke nostalgic, but also creepy and uncanny feelings, as well as the fear of human extinction. The Coronavirus has thus transformed the world into a mirror image of the imaginary world of pandemic/dystopian films, and vice versa.

Another reason why Sheikh Sani Yahaya and Pastor Oyakhilome have invoked movies to justify their claims is due to the key position of visuality as a superior mode of knowledge. This is indicated in the popular English language saying “seeing is believing.” A similar Hausa language dictum says gani ya kori ji (seeing expels hearing). This privileging of the visual over other sensory faculties affords film a uniquely persuasive and enchanting power (Merz 2015:107). Furthermore, conspiracy theories can easily use movies as evidence of their truth because, as imaginary narratives, they resist falsification, are reinforced by circular reasoning, and thus become a matter of faith rather than something that can be proved or disproved (Barkun 2003: 3-4).

To further connect movies and conspiracy theories, I borrow from Birgit Meyer’s notion of film as ‘revelation,’ which explores the capacity of film to visually reveal the invisible spiritual and occult forces and entities that form the bedrock of African and Pentecostal cosmologies. To Sheikh Sani Yahaya and Pastor Oyakhilome and their followers, pandemic/dystopian films do not only reveal hidden conspiracies against Islam and Christianity, but they also visually predicted the current situation induced by Coronavirus years before it happened.

Murtala Ibrahim received his PhD at the Department of Philosophy and Religious Studies, Utrecht University in 2017. For the doctoral project, he compared religious practises between Christ Embassy (Pentecostal Church) and NASFAT (Muslim group) within the context of co-existence in the Federal Capital of Nigeria, Abuja. He recently concluded a one year postdoctoral fellowship at the Institute of Cultural Anthropology, Freie University Berlin. Presently, he is a research fellow at the Department of Anthropology, Utrecht University. His research interest is in the emerging new religious groups in the Nigerian urban landscapes as well as religion in the public sphere.