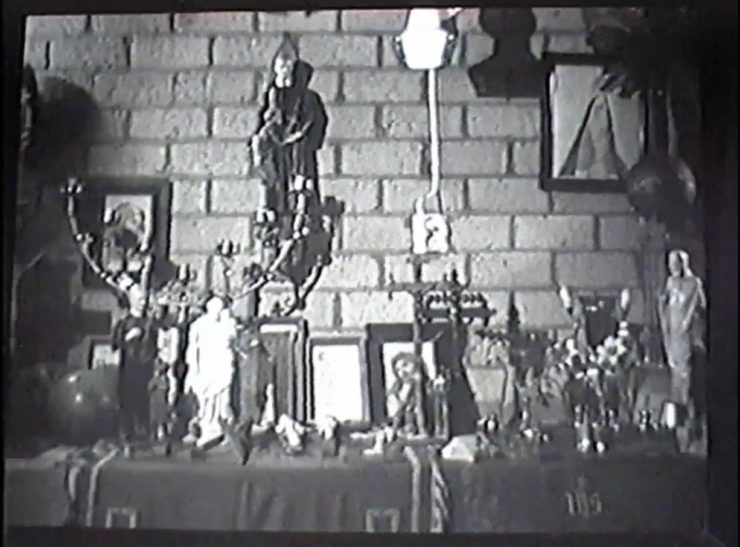 Derided by an object: Catholic stuff in my father’s ‘Speak-Drink-Shop’

When I was a child, I would often stay over at my grandmother Margriet’s house.[1] Once, she showed me a video of my late grandfather Kees, whom I have never met. I remember seeing a short, grainy film in black and white:

The film showed a room cluttered with all kinds of things that I had never seen before and a formally dressed, eloquently smoking man trying to explain them. This video returned to my memory as I pursued a course on the materiality of lived religion. I asked my father to provide me a copy of this video, which turned out to be Kees’ appearance in Van gewest tot gewest, a Dutch human interest TV show in 1969. The video shows his collection of Catholic devotionalia whilst letting him discuss why these objects are in his own home. Kees’ collection, as this brief essay seeks to clarify, mediates between Catholic and secular contexts.

Kees was born into a large, lower-class Catholic family in the 1930s.[2] As his family’s eldest son, Kees enrolled in the minor seminary in Megen.[3] Although he initially felt a calling to enter a monastic life, he became increasingly dissatisfied. Instead of pursuing a career as a priest, Kees moved to Utrecht in the 1950s to study psychology. In Utrecht he met Margriet, also a Catholic, whom he married in 1959. Kees and Margriet settled down in Goirle, a Catholic town in between Tilburg and the Flemish border. As Margriet remained a homemaker, Kees pursued a career as a psychologist. Together they established a post-war middle-class family with four children, living in a large house with a garden leading into the forest. Kees and Margriet’s children were raised Catholic: they were baptised, received their first Communion, read the Bible and attended Mass.

Even inside Kees’ Catholic pillar, the onslaught of secularism loomed large. Although the material implications of de-churching, especially the closing down of churches, are highly debated in the Netherlands right now, it is important to note that the province of Brabant was already facing emptying churches in the 1960s.[4] This process may be attributed to aesthetic shifts, transforming devotional practices in the aftermath of Vaticanum II, and, most significantly, a general wave of secularisation throughout the Netherlands at that time.[5] Such processes created ‘sacred waste’which Kees hoped to prevent from being fully discarded.[6] He would drive his car around Brabant to visit churches and collect objects that were about to be disposed of.[7]

In front of his audience on Dutch national television, Kees confessed that he would visit others’ homes to take Catholic objects from their attics. He described an anecdote:

If parents would have such a statue at home, the youth would find it horrible. If a girl starts dating, then she fears her relationship would end if either father or son keep a Sacred Heart [statue, red.] at home. (…) The youth are delighted that someone takes the trash out. Parents behold the departure of their beloved pieces with some nostalgia.[8]

When the societal functions of Catholic churches changed, the objects contained in these churches travelled. Kees noted that religious statues now became mere stuff or even ‘trash’. Moreover, the voyage of these objects into secular contexts incited a range of affects, ranging from fear to sorrow. Kees’ anecdotes indicate confusion and insecurity as to what Catholic matter should do in a secular home. Kees described this de-churching process as an ‘iconoclasm’ (beeldenstorm) which ‘came into fruition in peace’.[9] Perhaps he points here to an ‘iconoclash’ in the sense of Bruno Latour, in which the destruction of an idol ultimately affirms its existence and power.[10] More concretely, however, Kees argued that in the process of de-churching, Catholic and secularised means to sense the unseen enter into conflict.[11]

Kees assembled and displayed his collection of Catholic matter in a shed in the garden of his house. The video intersperses impressions of this collection with Kees’ own explanations. His collection included devotional statues, plaquettes, crucifixes, candelabra, books and even a coin deposit (figure 1). They hung on the wall, were placed on tables, or even hung from the roof, all of which must have overwhelmed those who entered Kees’ shed. Kees’ formal dress and eloquent speech indicated his respect towards his own objects (figure 2). Kees elaborated on what his objects did in their new contexts:

I firstly find it very pleasant to show those who do not experience this [his stuff, red.] any more from which community they [his present audience, red.] have emerged, what moved them [members of the community, red.], what held them together, what united them. My hope is to open a speak-shop, where beers may be consumed, a speak-drink-shop, where all this stuff may be left. The people could enter there, they could dance, talk, and behold what thought to liberate us, but perhaps only kept us imprisoned.[12]

Kees explained that his objects embodied the past sense of Catholic community and the experience of collective effervescence through which this community was formed. However, this sense eroded in the process of secularisation. The intended audience of his ‘speak-drink-shop’ indeed is secular. He hopes that they drink, dance and converse as they face objects from a past life-world. Referring to ‘what thought to liberate us’, Kees referred not to the Catholic faith in an abstract sense, but to his own ‘stuff’, his own religious media, and their agency in the shaping of Catholic identity.[13] This ‘stuff’ keeps ‘imprisoned’ its secular beholders. In other words, visitors to Kees’ ‘speak-drink-shop’ were faced with Catholic objects that continued to convey the Catholic contexts from which they were extracted. These objects evoked a ‘sacred residue’ through which Kees’ collection mediated a collective Catholic past.[14]

Kees understood that his collection might be controversial, if not offensive. He acknowledged that the ‘righteously faithful’ might find it ‘painful’ to witness how he rearranged Catholic devotionalia as ‘curiosities’.[15] In response to this potential blasphemy, Kees proposed that ‘this [collection, red.] indeed is a derision of myself, a derision of the human, who deforms, takes advantage of religious reality, because he is afraid of salvation, afraid to arrive at this painful liberation’.[16] Kees invoked pain to describe both the ‘salvation’ that faithful Catholics aspire towards and the blasphemy such Catholics might accuse his collection of. Kees’ objects ‘derided’ him, because they reaffirmed his attachment to his Catholic origins. He violated the sanctity of his Catholic objects whilst simultaneously affirming their continued agency.

Kees’ probing interviewer wondered how he remained so attached to these objects even if they derided him. Defensively lighting his cigar, Kees responded that ‘the human (…) keeps on looking for a hold to grab, for what I would call formation (vormgeving), of that which he desires, but fails to realise’.[17] According to Kees, in both religious and secular realities, objects work as ‘holds’ onto which humans can grab in order to access what lies beyond the here-and-now.[18] Kees’ predicate resonates with how Birgit Meyer positions materials as mediators with the unseen, both in religion and in culture.[19] If the process of de-churching is iconoclastic, Kees’ practice of collecting should be considered as an iconoclastic act in which different means of accessing the unseen come into conflict. Much like his contemporary Jacques Frenken, Kees’ collection of ‘curiosities’ violated the sanctity of Catholic matter whilst repositioning them into a secular constellation.[20] In the garden shed, his own bourgeois ‘speak-drink-shop’, Kees showed his fellow supposedly secularized citizens how they still desired for a ‘hold’ to grab onto.

Kees and Margriet only very rarely allowed visitors a glimpse into their garden shed. As their children grew older and they moved houses, Kees dispersed his collection across local thrift shops. Although Margriet no longer identifies as Catholic, she keeps a handful of reliquaries and crucifixes scattered across her living room. Kees’ TV appearance has acquired somewhat of a mythical status in our family, as this fragment is still shown at our annual reunion. As I have never practiced the Catholic faith myself, I hardly share my grandfather’s conservative melancholia for a lost religious past. Nonetheless, I could hardly deny that I rely on his remediated appearance to access my own intangible past.

Arent Boon is a Research Master student in Art History at Utrecht University. His research interests are the history of collecting and theories of materialism.

Meyer, Birgit. ‘Recycling the Christian Past: the Heritagization of Christianity and National Identity in the Netherlands’. In Rosemarie Buikema, Antoine Buyse and Antonius Robben, eds. Culture, Citizenship and Human Rights. London and New York: Routledge, 2019, 64 – 88.

[1] I wrote this essay as a scrapbook entry for my Materiality and Corporeality of Lived Religion class. I would like to thank Birgit Meyer, my fellow students, and, of course, Bart, Margriet and Kees.

[4] For de-churching in the contemporary Netherlands, see Beekers, ‘Converted Churches’ (2018).

[7] For de-churching, collecting and religious markets, see Cuperus, ‘Jesus up for Sale’ (2019), https://religiousmatters.nl/jesus-up-for-sale-religious-heritage-in-relimarkets/