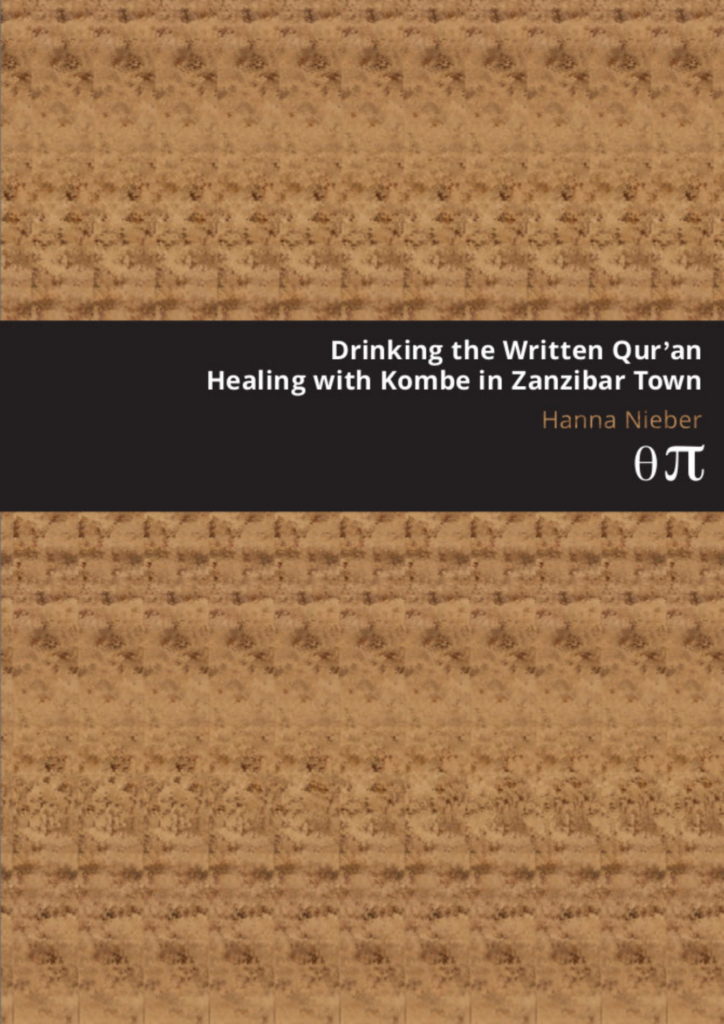 On February 28 of this year, Hanna Nieber defended her PhD thesis entitled Drinking the Written Qur’an, Healing with Kombe in Zanzibar Town. This study takes kombe as a topic: This is water used to wash off Qur’anic verses written with saffron ink on a plain plate or piece of paper that is ingested because it is trusted to contain Qur’anic verses and its healing powers. Hanna Nieber’s work was further reflected on and discussed during a symposium which was organized on the occasion of her defence, which was entitled Interdisciplinary Approaches to New Materialism, Religion, and Ethnographic Writing. She worked on her PhD research as part of the project Habitus and Habitats, Politics and Aesthetics of Religious World Making that was led by Prof Birgit Meyer and realized at the Leibniz Zentrum Moderner Orient, Berlin (funded by the Alexander von Humboldt Foundation). The thesis was co-supervised by Prof Kai Kresse (Leibniz-Zentrum Moderner Orient, Freie Universität Berlin).

During the public defence, Hanna Nieber persuasively responded to questions posed by the committee members who assessed her thesis, which were Prof Rose Marie Beck (Universität Leipzig), Dr Halkano Abdi Wario (Egerton University), Prof Martha Frederiks (Utrecht University), Dr Iris van der Tuin (Utrecht University), and Prof Peter Pels (Leiden University). The questions focused amongst other on the materiality of kombe (how is it ingested or stored?) and the advantages of using a diffractive approach to study kombe. After the defence, many attendants moved on to the symposium, which was chaired by Birgit Meyer. Before giving the word to Hanna Nieber, Meyer praised the defended dissertation for being highly original and innovative, since it productively applies theoretical insights developed within the interface of new-materialism and the material turn within religious studies, allowing her to explore and constitute kombe as the centrepiece of a variety of entanglements between humans, materials, and divine healing powers. During her presentation, Hanna Nieber explained how she has drawn on the work of Karen Barad, in particular, to conceptualize how kombe is constituted as a topic through the ethnographic research she engaged in, and how she learned through the metaphors that her interlocutors used to explain the workings of kombe in Zanzibar.

After her presentation, questions were asked by Halkano Abdi Wario about the ways in which people deal with the portable characteristics of kombe, or what happens to this material when it threatens to go to waste if too much is produced. David Morgan (Duke University), who visited the Religious matters program as a fellow from 23-29 February) asked her to reflect on insightful analogies between kombe and other materials through which the divine becomes present, namely the Eucharist or relics. Wario then provided insights into the ways in which reformist-oriented Muslims in Kenya also draw upon the healing powers of the Qur’an, but do so through the recitation of Qur’anic verses (kombe la kusomea), instead of written Qur’anic verses (kombe la kuandika).

The next presentation was given by Iris van der Tuin, who praised Nieber’s work for offering a creative example of how the diffractive method can be actualized productively in ethnographic research, which enables scholars to practice connective thinking. Van der Tuin argued that connective thinking is particularly valuable, because it allows us to restore the idea of a coherent world as a world of multiples, while knowledge about it is still one. This point was appreciated by Meyer, who emphasized the importance of thinking of a coherent world characterized by multiplicity, instead of coherence being informed by a Durkheimian model, in which it is provided by the sharing of the same norms and values. Nieber added that she indeed tried to develop one knowledge about a coherent world of multiples, since the idea of multiple knowledges has not been useful to her project. She explained that when she tried to analyse her research material by identifying ‘multiple knowledges’, the different ‘knowledges’ she distinguished were always entangled with each other, making it impossible to compartmentalize them in different categories.

The final speaker during the seminar was Rose Marie Beck, who stressed that she was happy to read an ethnographic study that uses the diffractive method productively. In her talk, Beck focused on the ways in which any study produces research topics in particular ways, yet is unable to say everything that is. In this way, research usually leaves a knowledge gap. This is recognized by Nieber, since she writes about how kombe is constituted as a topic in her thesis. Building upon this reflection, Beck raised the question whether research should strive for coherence, or should rather focus on establishing connections and relations as ethnographies are written.

The defence, the presentations, and the lively discussions that followed all demonstrated how the work of Hanna Nieber contributes and relates to current discussions within the material study of religion and the field of new materialism. We at the Religious Matters research group and the department of philosophy and religious studies at Utrecht University were very happy to have the opportunity to host and partake in this highly interesting and celebratory event, and wish the young Dr Nieber all the best for her further career. Congratulations to Hanna!