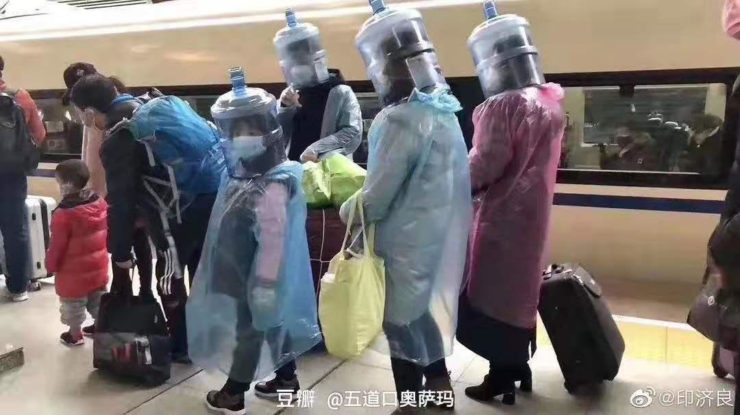 More than ten years ago, I published an article entitled Global Breathing. It discusses a social history of breathing techniques in spiritual practices in India and China, such Yoga and Qi Gong. Hindu, Daoist, and Buddhist traditions regard control over breathing not only as essential for living, but also for spiritual growth. It is an idea that is also shared in some Islamic and Christian traditions. The article explores both the nationalization and the globalization of these techniques that have reached audiences far beyond India and China. Today we see the globalization of a virus that attacks our ability to breathe. No spiritual technique is available to keep control over our breathing. One has to trust mechanical devices to take over our breathing while fighting the virus.

The Corona-virus is an attack on the body, both the individual body and the body politic. In the media most attention is given to the latter. None of the world’s governments has prepared for this attack; instead, many governments (local and national) have tried to repress information about the virus instead of early repressing its spread. The main culprit is of course the Chinese government that seems to have learned little from the earlier SARS epidemic. Many other governments, most notably those of the USA, Iran, and Brazil, have displayed their own lack of responsible governance. At the same time, everyone blames everyone else for not being prepared.  One would imagine that citizens could expect their governments to be prepared to something that has been a threat to humanity through the ages.  They have failed abysmally, but in an ironic twist, receive high approval ratings for their crisis management. The relation between science and politics is one of the most important aspects of this failure. One only has to read Richard Evans’ description of the handling of the Cholera outbreak in Hamburg in the second half of the nineteenth century to see that not much has changed in this regard.

Another aspect can be called cultural. A virus that originates and spreads in China seems to have been regarded as a Chinese virus that would somehow only be a Chinese problem. Somehow, in the Netherlands and the UK the notion that this is a Chinese virus has even been linked to the development of 5G connectivity. Terrorists have put fire in several cell towers to prevent the spread of the virus. One cannot help but wonder whether the political and scientific response would have been just as slow if the virus would have first occurred in Germany or in the USA.  Despite decades of globalization in which China was absolutely central, the country is still seen as so differently oriental that things that happen there do not affect the West. At a more limited scale one notices something similar in the fast response by Singapore with its vast majority of citizens with Chinese origins to the outbreak in China, coupled with its incredible neglect of Singapore’s South Asian migrant workers, as if they did not exist.

Despite all the claims that we have to show solidarity in this crisis of humanity, it is clear that the world’s inequalities and racial differences are becoming even more clearly pronounced. After an initial period in which Chinese and other Asians, living in Western countries, were subjected to vilification as carriers of the disease, Chinese authorities have, for some racist reason, targeted Africans living in China. Anti-foreign xenophobia in the country is rampant. In South Asia, millions of poor migrant workers are made to suffer in the lockdowns, while statistics show that in the US African Americans and Hispanics die disproportionately.

The media follow these political developments in detail and there is a lot of political discussion on social media. Here I want to draw attention to something that deserves more attention: the individual body and the conceptualization of the body in cultural responses to the virus. One is made aware of how often one touches one’s face, and how seldom one washes one’s hands. The typical urban experience of ‘being in each other’s face’ is also transformed in a ‘being out of each other’s face’. These disciplines of the body and the emotions they produce deserve reflection. What has struck me most are two puzzling phenomena. The first is the wearing of facemasks. While East- and South-East Asian societies show no reluctance at all in the wearing of facemasks, Western societies show great hesitance. Much of the debate in Western countries is about seemingly rational issues, such as the effectiveness of facemasks, their use by children or people with disabilities, or their availability. Behind these rational discussions lurks a hidden discomfort about not showing one’s face, one’s individuality. There is a fear of becoming a face-less mass society. There is also a fear of losing control of one’s body, especially when it is ordered by authorities. The mask becomes a sign of collective obedience to outside authority. Such collective sentiments were already apparent in the enormous antagonism against Muslim veiling and other forms of Islamic modesty. It seems to be an inescapable requirement for participation in Western societies that one shows one’s face.

Such sentiments are not shared in East Asia. Japan is in many ways the leading force in Asian modernity. The facemask came to be widely accepted after the Spanish (in fact, American) flu, and in general, Japanese are very methodical in their hygiene. Regular handwashing and wearing gloves are common practices. They are all part of a civic sense of consideration for others. The Chinese, on the other hand, are not famous for their hygienic lifestyle. Even recently, hawking on the street was quite common among senior citizens. After SARS 1 and 2 their wet markets have become known to be breeding grounds of dangerous viruses. Nevertheless, facemasks have become the norm in public life, especially with a growing awareness of the high levels of air pollution in China. This is true for large parts of South-East Asia too. It seems that the Western sense of losing face when wearing a facemask does not bother societies that have always been portrayed in terms of ‘having face’ or ‘losing face’.

The other bodily response to the viral threat that struck me is the German and Dutch run on toilet paper. Why is toilet paper such an absolute necessity? Anthropologically speaking, the toilet is the liminal space between culture and nature. As long as one has toilet paper, one is dignified and can brave the virus that is such a strong reminder of the fact that we are part of nature. The natural vulnerability of the body in the toilet requires practices that signify a civilized distance from nature. Again, there are some significant differences with Asian societies. Many Asian societies prefer the use of water; and again the Japanese are the leaders of modern culture with their spectacular toilet systems. In Indian toilets, on the other hand, there is a small pot with water. The left hand is used for toilet activities, and the right hand for food. At the same time higher castes hardly ever clean their toilets, but require the assistance of a special untouchable caste to do this. An important aspect of Gandhian social reform was to promote self-cleaning of toilets. In rural China, toilet paper is rare while in urban China the sewage systems are often not capable of dealing with toilet paper. Only in Hong Kong there has been a run on toilet paper, perhaps to show that Hong Kong is part of Western civilization.

Finally, the most important bodily response to the viral attack is death, the end of the body. Here Asian and Western societies have something in common. In various ways death is denied. It is a topic that is avoided, relegated to hospitals and mortuaries. While death occurs constantly, I have never before seen daily statistics of deaths. In Holland it strikes me how secular the response is to the inevitable mortality of people. There is anxiety, even fear, especially of dying alone without the presence of family and friends, but I have not seen religious responses. Death and mourning for the dead used to be a privileged area of religious concern. Only fieldwork can help us find out how the responses are in Asia, but fieldwork we cannot do these days.

Peter van der Veer is an anthropologist. He is Director at the Max Planck Institute for the Study of Religious and Ethnic Diversity in Göttingen and Professor Emeritus at Utrecht University. He works on comparative studies of India and China. Click here for more info.