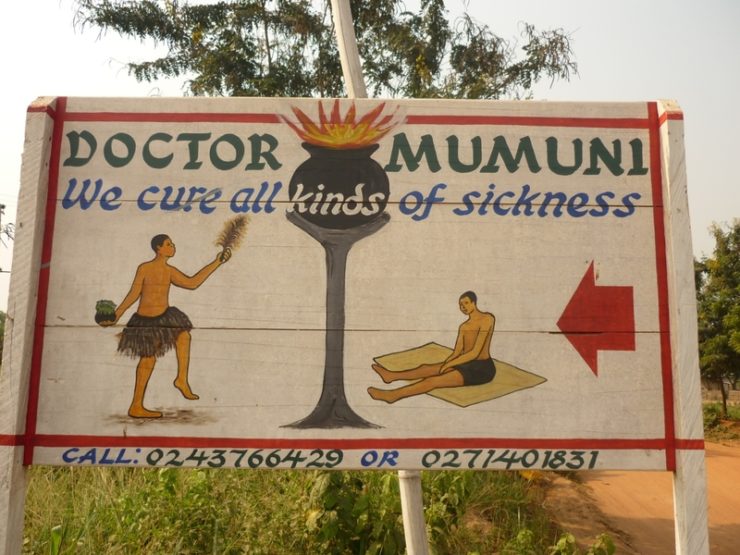 Through advertisement, urban areas of contemporary Ghana offer opportunity for vibrant and plural healing practices. As Kodjo Senah (a Professor of Sociology, University of Ghana), shows in his contribution in this gallery, along major highways, small streets and open spaces, digital printed and hand-painted billboards and posters contest for public space in the urban areas of the country.

From these forms of representation, the aesthetic paradigms of Ghanaian visual communication (Cristofano, 2014) in targeting a vast range of chronic and degenerative illnesses and diseases may be appreciated.

These images express the highly diverse setting of Ghanaian society, revealing how different traditions and therapeutic trajectories interact and compete with each other in the public domain. However, as Senah reiterated in his presentation entitled “Healing Practices Across Religions”1, this development is a complete departure from what obtained during the colonial era, when the British administration passed the Native Customs Regulation Ordinance (1878), under which a number of local practices and traditional healing were banned.

The ban forced healers to remain in rural areas or to operate secretly in the cities. However, after Ghana became independent in 1957, the new nationalist leader desired a Ghanaian state with a unique political identity that incorporated many traditional icons into the aesthetics and politics of state formation. Thus, the state-induced formation of a national healers association was aimed among others, to promote the state philosophy of African Personality as a rallying cry for Africans and African in the Diaspora (Senah, 1997).

Although these attempts were not entirely successful, in later years promotion of traditional healing came to focus on investigating the medicinal properties of herbal products (Acheampong & Vasconi, 2010). Therefore, over the years, new herbal clinics operated by Christians and Muslims have emerged mostly in the urban areas of Ghana and are being used by Ghanaians across the religious divide. Indeed, as Senah has noted, pharmaceutical products have “been so integrated into the local therapeutic regimen that they have become cultural products” (1997:209). The same can be said for herbal products. Indeed, in people’s everyday life, different treatments are not mutually exclusive but “they overlap given the processual nature of illness” (1992:138).

As a consequence, traditional healers no longer operate in obscure places as before and most of them now rely on street advertisements to show the ailments they can treat. Next to these so-called traditionalists and Muslim healers (mallams), this collection of photographs by Kodjo Senah offers a view of the giant-size billboards through which different Christian churches publicly promote their healing practices.