Pooyan Tamimi Arab delivered a Studium Generale Lecture on April 24, 2017, at Wageningen University. The title of the lecture was “State and Religion: Secularism, Identity and Neutrality”. It can be watched here.

The lecture was based on a forthcoming chapter entitled “Strict Neutrality Reconsidered: Religion and Political Belonging in the Netherlands.” Tamimi Arab began by explaining why a wide consensus has emerged among political philosophers and social scientists that the strict neutrality paradigm of political secularism must be overcome. He reflected on the ideas of Martha Nussbaum in particular, who has defended the principle of accommodation of religious difference, which trades religious preferences with great delicacy, as a superior alternative to strictness. Although accommodation is practiced in the Netherlands, Tamimi Arab argued that the strict neutrality paradigm must be reconsidered in the face of unabating and wider European aversion to a publicly visible, audible, and palpable Islamic presence, and to the global dominance of religion as an important category of belonging. Focusing on the Dutch case, in his lecture he defended strict neutrality secularism as a force that mitigates discrimination of Islamic aesthetics—especially mosques and Islamic calls to prayer, but also, to an extent, the face-veil and ritual slaughter—and secures Muslim citizens’  political belonging. The longer, written version of the argument is available as a draft upon request (please e-mail Pooyan Tamimi Arab at p.tamimiarab@uu.nl). 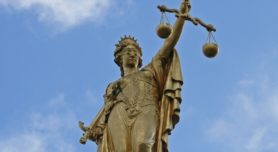 Statue of Lady Justice on the gilted Palace of Justice. Bruges, Belgium.