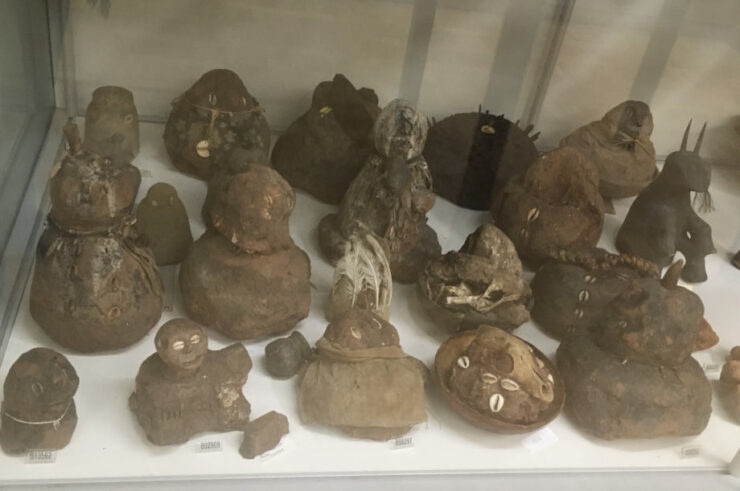 Various scholars have studied the collecting activities of missionaries in areas colonized by European powers, but so far the insights gained have barely been synthesized across various disciplines. While colonial collections and issues around the restitution of looted art currently are subject to intense public and scholarly debates, the role of missionaries in assembling objects that found their way, often through crooked trajectories, into ethnological and other museums has received comparatively less attention. This may be due to the fact that a lingering secular bias makes religion appear as marginal and hence easily overlooked by scholars in anthropology, art history, heritage studies and museum studies. And while scholars in the study of religion are moving beyond a mentalistic focus on concepts and meanings, starting to take the material dimension of religion more seriously, they have barely acknowledged the important role of missions in relation to ethnography and collecting (for mission exhibitions and mission museums, for the art market and for state-run ethnological museums). We propose that a focus on items gathered by missionaries or in contexts of missionary work is a productive starting point for a critical analysis of the provenance, conservation and future re-framing of objects in current ethnological and other museums. Conducting object-centered research and material analysis is not only rewarding in an empirical sense, but also opens up exciting debates about the religion-materiality nexus from the angle of “material religion”, “object-oriented ontologies” and “new materialisms”.

Inviting scholars who are currently engaging in unpacking collections in museum depots, mission archives and related sites that consist of items assembled by Catholic and Protestant missionaries in colonial times, this workshop will offer a forum for the exchange of insights about some broader conceptual and methodological issues based on detailed work in research and conservation. We propose to focus on the following sets of themes:

Gathering: Under which conditions and circumstances were items acquired by missionaries? Which kinds of items were assembled, and are there certain preferences? To what extent did missionaries strive to assemble items regarded as sacred among their original users? In what kinds of exchanges (gift-giving, commodity-exchange, dispossession under duress)  were these items involved?

Conservation and Display: How were the items shipped and put in circulation? What are their trajectories? How were they stored, preserved and treated? How were they displayed in different kinds of (secular or Christian) temporary or permanent exhibitions? How do such items relate to the spheres of art and heritage?

Valuation: How were the items valued and classified by their original owners/users and at subsequent stages in their trajectory? Which concepts – e.g. “idol”, “fetish”, “charm” – were employed to invest them with new values and meanings? How and to what extent were the items and concepts summoned into colonial knowledge production? In which ideological and racist frames were they trapped? Which strategies did various custodians employ to assess the re-valuation that occurred across the items’ trajectories into ethnological and other museums?

Re-evaluation: how is the provenance of collections than can be traced to missionary activities evaluated today, by museums, as well as by the successors of missions once active in colonial areas? Which efforts are taken to trace their trajectories? Are they subject to restitution claims? Are communities of origin and diasporas involved? How do the Christian descendants of the people once converted by missionaries see these objects today? Are they re-framed as cultural heritage? How are the spirit forces once connected to (some of) these objects assessed today? Which stories can these items tell about their trajectories, and to what extent can they yield new stories about our highly entangled world?

Please click here for an overview of the programme including the abstracts.