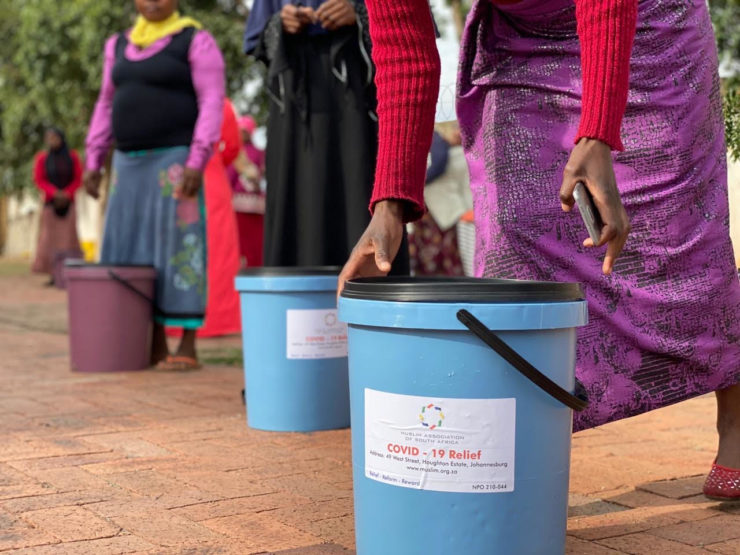 Vulnerabilities and Interventions in Times of Corona: Bodies, Food and Religion in South Africa

If the Coronavirus pandemic has rendered visible the unequal vulnerability to the virus across distinctions of class, gender, age and race, it is the vulnerability of the poor that demands our focused attention when seen from the global south.[i] Philosophers may reflect in general terms on our common vulnerability and the way we think about and relate to life and death, but it is the anthropological attendance to the concrete, local circumstances within which people live that might be helpful to get a clearer ground-up perspective on the current crisis and interventions.

Taking my cue from the Religious Matters project’s foregrounding of bodies and food as key themes for focused attention, I will make a few observations from a South African location on the role of religious institutions in keeping bodies apart and distributing food within the political-economy of the country. Since the conventional anthropological method of face-to-face interaction is not possible at the moment, the sources or lenses through which we can get a glimpse of these aspects of the crisis are limited to information from government and health institutions, reports of various quality from journalists, and interactions on social media, including from online activities of religious organizations themselves.

The primary way to stop the Coronavirus from spreading, the World Health Organization (WHO) has been advising, is by practicing physical distancing. Since the virus is transmitted from person to person, from body to body, the interaction between humans needs to be limited. Taking this advice seriously and having discussed the looming crisis and intervention with cabinet, President Cyril Ramaphosa on 15 March 2020 declared a national state of disaster.[ii] Although the lockdown was to be implemented with the help of the police and military from midnight on 26 March until 16 April, it has in the meantime been extended until the end of April. The strict lockdown regulations halted international travel and limited domestic travel. Except for specified essential workers, who need official permits, the vast majority of people in South Africa have to stay at home and are allowed to leave their homes only to buy food and for medical reasons.

Although this medical advice on physical distancing was taken seriously, its implementation in South Africa’s townships and informal settlements quickly proved impossible. With a few million people sharing cramped shacks, communal toilets and taps, it became clear that the possibility of physical distancing and handwashing was the privilege of those who have houses and running water. Although Ramaphosa urged the police and military to act with compassion and kindness in helping to implement the regulations,[iii] instances of police and military brutality in densely populated urban centers, townships and informal settlements, have been reported.[iv]

To address the high population density in informal settlements, the South African government is considering the relocation of those who agree to nearby areas, although they realize the sensitivity of such an intervention.[v] Many residents instead prefer that the water and sanitation facilities in their settlements be upgraded.[vi] Global experts have emphasized that a top-down approach from government would not be successful, but that community leaders at local level – including sangomas and faith based organizations – need to be actively involved for interventions to be reasonably successful.[vii]

Given this social, political and economic context, what role do religious institutions in South Africa play in promoting or obstructing physical distancing? If religions unite adherents around common beliefs and ritual practices, as Durkheim famously held, and this often occurs in a shared physical space, how have religions in South Africa dealt with the restrictions declared by the state?

Although a small number of adherents initially opposed the regulations and insisted that they would convene (eg Bishop Ngcobo in Kwazulu-Natal),[viii] the majority of religious institutions agreed to the lockdown regulations, encouraging the practice of religious rituals at home and online instead.[ix] The only ritual that has continued to raise concern is funerals, although government has limited the numbers who are allowed to attend.[x]

In line with the South African model of cooperation between state and religious institutions, rather than separation or suppression, President Ramaphosa met with religious leaders to discuss physical distancing as a necessary step to address the Corona crisis.[xi] The Zion Christian Church (ZCC) agreed to cancel their massive annual Easter pilgrimage to Moria in the Limpopo province. This followed after it became clear that several people who attended a church service in Bloemfontein had tested positive – among them a popular evangelical pastor, Angus Buchan, and the leader of the African Christian Democratic Party, Rev Kenneth Meshoe.[xii] The Claremont Main Road Mosque in Cape Town closed on 16 March, and has continued their activities via livestreaming and social media.[xiii] With the possibility of the lockdown being further extended and the gathering of large groups be forbidden for some time, Ramadan which has just started will be practiced at home this year.

The wealthy, Pentecostal preacher from Malawi who is based in South Africa, Prophet Shepherd Bushiri, initially called the virus ‘demonic’ and told followers that they were protected since it targeted only certain people.[xiv] He has recently launched an app for which users must pay in order to attend his online church services.[xv] Bushiri’s requests for money from members has been criticized in the media as inappropriate in this time of crisis.[xvi]

An initial concern was that traditional healers were not well informed about the need for physical distancing and taking the necessary precautions to prevent the spread of the virus. The Traditional Healers Association: SADC Region underlined the need for such education, emphasizing that traditional leaders play an extremely important role in the lives of many South Africans. Since many South Africans consult them as authorities in traditional practices, traditional healers need to practice and promote physical distancing and know when to refer a person for medical treatment.[xvii]

It is clear from the preceding that the key term body can be employed to direct our attention to physical distancing in the time of the Coronavirus and its profound disruption of collective religious rituals that are practiced in physical proximity. In which ways might food help us to focus our observations?

The claim that food constitutes the basis for human life and culture can be traced back to the philosopher Ludwig Feuerbach’s well-known materialist theory that ‘Man is what he eats’ (‘Der Mensch ist was er isst’).[xviii] Feuerbach’s insight that ‘human consciousness is not an independent spiritual essence, aloof from the material world of objects’, but that ‘human beings were constituted by their reciprocal engagements with material objects’, was taken up and elaborated by Karl Marx who considered ‘the “spiritual intercourse” of human beings as an “efflux of their material condition”‘. It is precisely these theorists, David Chidester holds, that are foundational in his analysis of the material dynamics of religion.[xix]

In discussing the economics of religion, Chidester in his early work Patterns of action: Religion and ethics in a comparative perspective (1987) distinguished between reciprocal (Mauss), redistributive (Marx), and market or capitalist (Adam Smith) modes of economic exchange. We might include under the first mode liberal theorists such as Rawls and Nussbaum, and under the second mode radical theorists in the Marxist tradition with followers in liberation theology. An outstanding analysis with affinity to the latter is offered in John Dominic Crossan’s groundbreaking publications on the historical Jesus and Pauline churches,[xx] according to which commensality or the sharing of food as radical distributive justice constituted the heart of those movements.

Given that neoliberal capitalism, Chidester’s third possibility, is the dominant mode of economic exchange in our world, how has the South African government and civil society, particularly religious institutions, reacted to the impact of the Coronavirus on the economy and food insecurities in the country?

Insisting that, in the midst of the Corona crisis, preserving lives by means of physical distancing is more important than prioritizing the economy of the country, President Ramaphosa simultaneously acknowledged the deepening poverty and hunger that the Corona crisis has caused among many people in South Africa, and announced several governmental initiatives to address these problems. Among these are measures that offer tax relief, support those who lost their jobs, financially assist small businesses that had to close due to the lockdown, as well as an increase of child support and pensioner grants and the distribution of food packages to address the alarming increase of hunger among the most vulnerable, including the homeless. He admitted that government’s ability to distribute food has been inadequate to meet the huge demand, but indicated that a technology-based solution for vouchers and cash transferals was being finalized and that government would work with NGOs and community-based organizations to distribute food parcels. He gave the assurance that corrupt officials and anyone who abuse the system of food distribution, would be dealt with harshly by the law.[xxi]

The necessity to decentralize mechanisms to distribute food has been raised by a number of community leaders and analysts. Although government’s relaxation of regulations allowing spaza shops and informal food sellers to trade[xxii] and the continuation of provincial school feeding schemes[xxiii] have been helpful, credit should be given to NGOs, soup kitchens, charities, philanthropic donations,[xxiv] faith-based organizations and grassroots initiatives that have already for the past few weeks actively distributed food parcels to those in need.

Among faith-based organisations, some of them more explicitly linked to religious institutions than others, Gift of the Givers,[xxv] the Muslim Association of South Africa[xxvi], the South African National Zakah Fund (SANZAF) in collaboration with Jamiatul Ulama KZN – Project HELP and the Natal Memon Jamaat (NMJ),[xxvii] and the SA Muslim Covid-19 Response Task Team[xxviii] have been at the forefront in providing and distributing essential medical equipment and food parcels. According to the latter’s Facebook page, South African Muslim organizations have since the lockdown until 22 April given 55 million South African Rand of relief aid to more than one million vulnerable people.[xxix]

According to the Kerkbode, the official publication of the Nederduitse Gereformeerde Kerk, their buildings have on request of the South African Council of Churches been registered as essential centres for relief aid, with local congregations and social service councils in synods taking initiatives to provide food packages and assistance to vulnerable people in this time of crisis.[xxx]

From these observations on bodies and food as the material basis of life, culture and religion, made from a South African location, it should be clear that the South African government’s engagement with religious organizations to promote physical distancing in the fight against the Coronavirus is commendable. To what extent, in which ways, even under which conditions, the government would partner with faith-based organizations to distribute food will need to be seen. Viewed from a ground-up, local, community level we will, as the current crisis unfolds, need to follow and critically analyze the constructive as well as problematic role that religious organizations can play and in fact play in mitigating the impact of the Coronavirus on the poor and hungry.

Johan Strijdom is Professor in Religious Studies at the University of South Africa. His research focuses on critical and material theories of religion from a postcolonial, South African perspective. He is editor of the Journal for the Study of Religion.

[i] Stephen Khan. ”South Africa needs to mitigate the worst of its inequalities in tackling coronavirus”. The Conversation, April 5th, 2020 (weblink).

[xxi] Cyril Ramaphosa. ”Statement by President Cyril Ramaphosa on further economic and social measures in response to the Covid-19 epidemic”. The Presidency | Republic of South Africa, April 21st, 2020 (weblink). For instances of corrupt officials involved in the distribution of food parcels and on the looting of food trucks, see: Mthutuzeli Ntseku. ”Covid-19 lockdown: ‘Politicians handing out food parcels is not helping crisis”’. IOL, April 21st, 2020 (weblink).