A workshop on heritage, religion and difference in Berlin

Several members of the Religious Matters project participated in the workshop ‘Heritage, Religion, Authenticity and Difference’, which took place on November 29, 2017, at the Leibniz-Zentrum Moderner Orient (ZMO) in Berlin. Organized by Duane Jethro, Abdoulaye Sounaye and Birgit Meyer, the event was a collaboration between the Centre for Anthropological Research on Museums and Heritage (CARMAH) at Humboldt University, the ZMO and Utrecht University.

The workshop took as its starting point recent controversies concerning the intersection of religion, heritage and authenticity, such as contestation over the face veil in France, debates about Judeo-Christian heritage in the Netherlands and the controversy around the intention to place a cross on the Humboldt Forum museum, which is now under construction in Berlin. As the organizers put it: ‘Across Europe, religion and the secular are thrown into relief when heritage is used as a language for framing seemingly incontestable authentic national cultures and values to among other things shore up against real or perceived social change.’ The organizers pointed to the need for a critical reflection about not only the relationship between religion, heritage and authenticity, but also ‘the management and mediation of forms of difference’. In what ways, they asked, is religious difference construed, either implicitly or explicitly, in these emergent debates about religion and heritage?

The workshop consisted of four panels, each focusing on specific dimensions of the intersection between religion and heritage (see the full program here). The first panel, with presentations by Annegret Roelcke (FU/ZMO), Pooyan Tamimi Arab (Utrecht) and Christine Gerbich (CARMAH), looked at contested debates about the delineation of Islamic heritage, with a special focus on museum practices, in Turkey, Germany and the Netherlands. In the second panel, Duane Jethro (CARMAH, paper co-authored by Regina Sarreiter) and I discussed the reframing of Christianity as cultural heritage, and the debates that these efforts at heritagization elicit, with reference to converted churches in the Netherlands (my paper) and the envisioned cross on the Humboldt Forum in Berlin (Jethro).
Focusing on the relation between heritage and race, Markus Balkenhol (Meertens) and Grit Köppen (Bayreuth) looked at the use of images in postcolonial critiques of the Dutch colonial past and the British Victorian era. In the final panel, Marian Burchardt (Leipzig) and Irene Stengs and Ernst van den Hemel (Meertens) discussed the ways in which the construction of religious heritage involves assemblages (as Burchardt phrased it) involving numerous actors, discourses as well as social, cultural, political and legal dimensions. In the case of Stengs and Van den Hemel, it also specifically involved the multimedia event ‘The Passion’, a popular annual televised show broadcasted in the Netherlands that, they argued, entailed a particular ‘pre-enactment’ of emotion. Burchardt described religious heritage as a new social form in which religion matters in society, particularly under conditions of both unchurching and increased religious diversity.

The workshop ended with responses from Sharon Macdonald (CARMAH) and Birgit Meyer (Utrecht), who both focused on the intersections between religion and heritage. Macdonald asked to what extent talk about heritage operates as a kind of religious discourse and suggested that both heritage and religion offer an atmosphere that is set apart from the everyday as well as from commerce. At the same time, paradoxically, if conflicts arise these are often between the protagonists of heritage and religious groups. Macdonald further suggested that a fruitful avenue of further analysis could be to examine to what extent heritage and religion are characterized by different object ontologies.

Birgit Meyer concluded that the workshop has shown that heritage and religious studies need each other, as religion and heritage refer to processes that are often entwined. Examples include the reframing of religion as heritage (as in debates about abandoned church buildings or the cross on the Humboldt Forum), heritage as quasi-religion (in formations of a ‘secular sacred’) and situations in which religion and heritage become entangled to an extent that makes it hard to separate them from one another (as in ‘The Passion’). Meyer ended with a plea to squarely situate these phenomena in contemporary contexts of diversity, where modes and moods of belonging strongly affect people’s engagement with heritage and religion.
Taken together, the workshop showed the urgency of studying religion and heritage in relation to one another in today’s diversifying and (partly) unchurching societies. How new forms, subjects and modalities of difference are construed in this context is a pertinent question that deserves full attention in our current research agendas.

See also this short summary of the workshop on the website of the Centre for Anthropological Research on Museums and Heritage. 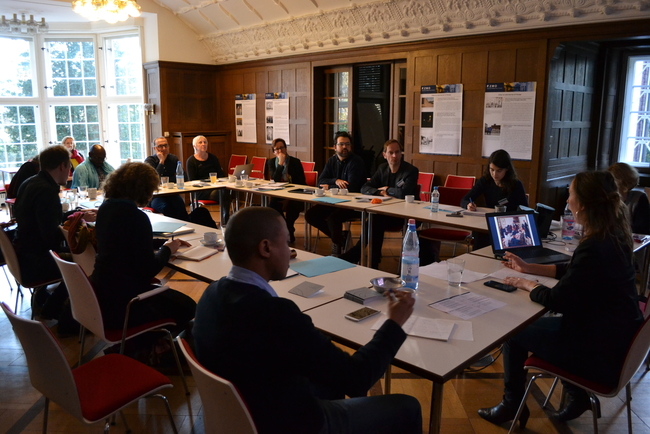