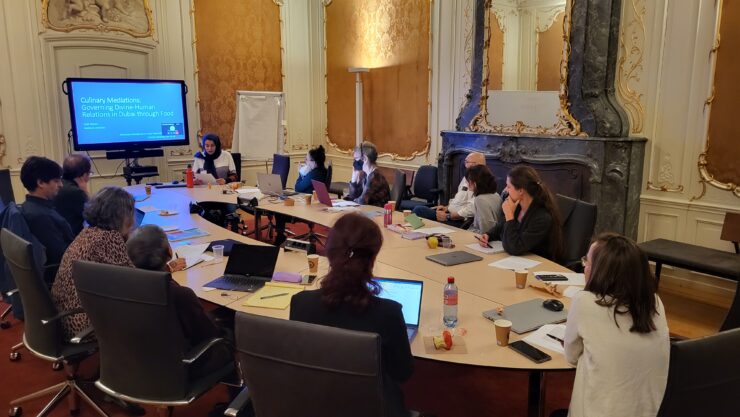 On 29 and 30 November 2022, the Department of Philosophy and Religious Studies at Utrecht University hosted the international research workshop Alimentary Entanglements: Food, Materiality, and Religion. The workshop was organized by Margreet van Es (Utrecht University) and Shaheed Tayob (Stellenbosch University) as part of the research program Religious Matters in an Entangled World. The workshop brought together scholars from a variety of disciplines – religious studies, anthropology, literature studies, performance studies, history, and political sciences – to explore how food as a material substance is entangled with questions of the body, self, home, the divine, community, nation, and livelihood in different historical and geographical contexts. What can foodstuffs and foodways tell us about how people situate themselves in the world, and about how relationships are calibrated among humans, between humans and non-human animals, and between humans and a transcendent realm?

In the Tuesday afternoon session on ‘Food, Materiality, and Religion’, Brad Weiss (William & Mary) kicked off by presenting his recent ethnographic research on winemaking and winetasting in California in a context of rapid climate change and catastrophic fires. His paper reflected on wine as a substance whose meaning and value is at once deeply grounded in its material qualities, while also embodying qualities of transcendence. The second paper by Margreet van Es (Utrecht University) provided an analysis of how aspirations of upward social mobility and cosmopolitanism become materialized in halal steakhouses, Tex-Mex restaurants, and sushi bars in Rotterdam. Finally, Joud Alkorani (Radboud University Nijmegen) discussed migrant women’s everyday experiences with food in the U.A.E. amidst state efforts to promote private and a-political forms of Islam, as part of her analysis of Muslim piety after the Arab Spring. The three papers led to in-depth discussions among the workshop participants about how eating and drinking opens pathways to worlds beyond the here and now. The papers also showed the importance of taking the material properties of food very seriously as part of a scholarly effort to understand people’s imaginations of these worlds.

On Wednesday morning, the workshop continued with a session on ‘Religion and Human-Animal Entanglements’. Noha Fikry (University of Toronto) explored the constitutive relationship between caring and killing in her paper on the animal-rearing practices of women farmers in rural Egypt, and she explained how these practices are situated in a broader religious quest of eating well, killing animals humanely, and feeding family. In his paper on meat markets in Mumbai, Shaheed Tayob (Stellenbosch University) explored the political valence of disgust evident in a series of interactions between Muslim butchers and meat consumers in the politically and religiously fraught context of Mumbai. The third paper by Parama Roy (University of California, Davis) provided an analysis of British colonial miracle narratives about Indian children who were raised by wolves and later ‘re-humanized’ by Protestant missionaries. In these stories, a significant dimension of the wolf child’s re-humanization involved the pedagogy of (so-called) human appetite and human modes of eating, and disengagement from purportedly animal ones. Shedding different lights on human-animal entanglements, the three papers led to discussions about food, death, and violence, but also about gender, racism, and coloniality.

After the lunch break, the paper by Mariska Jung (VU Brussels) on political resistance to the growing availability of halal meat in Western Europe provided a thematically smooth transition into the Wednesday afternoon session on ‘Religion, Meat, and Morality’. Raising the question of why precisely halal meat often invokes such charged responses, Jung argued that particular preconceptions of killing and eating animals ‘the right way’ have historically been crucial to colonial ideas about what it means to be human, and hence to racial classification systems. The second paper by Eve Jochnowitz (YIVO Institute/Workers Circle) explored how early-twentieth-century Yiddish writers in Europe, the Americas, and Palestine drew intense and contentious connections between Jewish eating and Jewish politics while arguing for or against vegetarianism. Last but not least, Julia Hauser (University of Kassel/ICAS:MP) presented her research on the connections between white supremacy and vegetarianism as promoted by the new religious movement ‘Mazdaznan’ in early-twentieth-century Chicago, which often referred to an elusive Orient while obliterating any Hindu inspiration. The three paper presentations and the ensuing discussions made it clear, among many things, that the many ethical considerations surrounding meat consumption (and the political implications of these considerations) can never simply be reduced to a binary opposition between ‘ethical abstinence’ versus ‘unethical meat consumption’. Many ethical perspectives coexist (and sometimes clash) regarding what animals to eat, how to care for them, how to slaughter them, what parts to eat and what parts not to eat, how to prepare the meat, and finally: when, where, and with whom to eat it.

In the final part of the workshop, Manpreet Janeja (Utrecht University) and Birgit Meyer (Utrecht University) provided a few general reflections and concluding remarks. Manpreet Janeja emphasized the importance of food as a boundary-maker and as an entry point into the study of religion and materiality, and she raised the question of what presumptions we bring to our research in terms of what ‘religion’ is, what we consider ‘food’, and what ‘ethics’ are. Birgit Meyer rounded up the event with reflections on a metabolist philosophy of food as an inroad into the various kinds of entanglements that religion facilitates. Meditating on religion as a code for reaching out to the beyond, Meyer suggests bringing the study of food and religion together in ways that link symbolic meanings and values of food as vital substance with everyday contexts of production and consumption. These closing comments captured much of the vitality of the event and offer much promise for future publication and research.