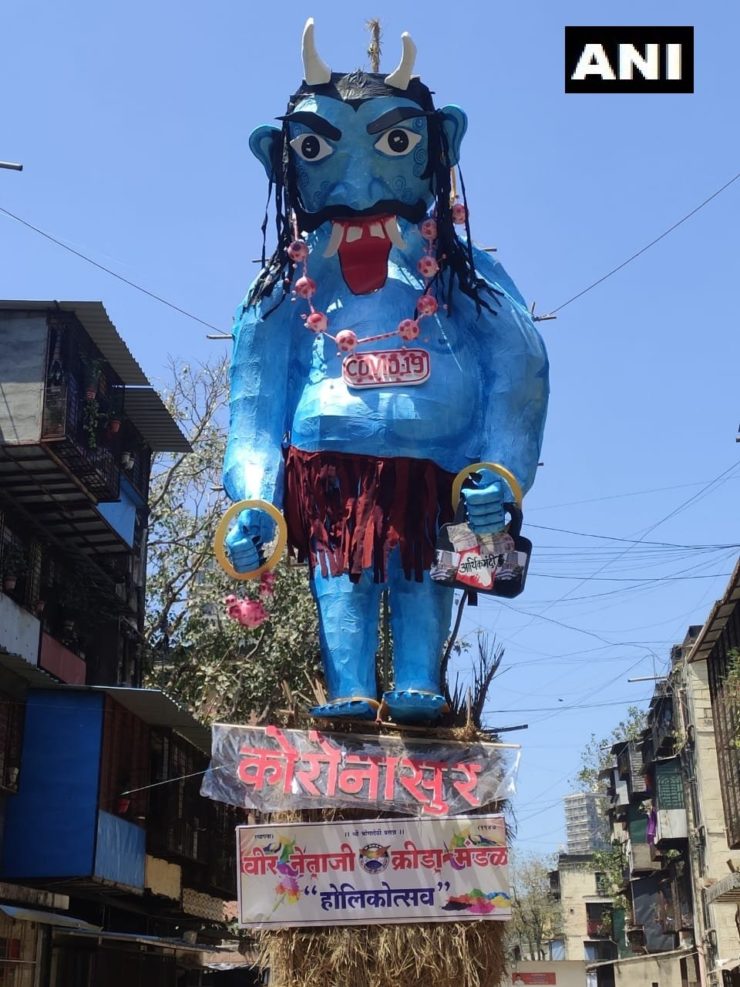 The ongoing Covid-19 crisis has evoked a strong and persistent urge among human actors to get closer to ‘the truth’—about the virus, its characteristics, strengths and weaknesses. How does the virus look? What form/shape is it in? How does it act? These questions may be imperative to science, in its endeavour to seek a solution to the pandemic. However, such a project of ‘figuring out’ the virus is not limited to the scientific community alone; but has been taken up by religions and religious groups too.

One very interesting figuration of the virus was “CoronaSur” (fig. 1), a fifty-feet tall effigy conjured up for the Holika Dahan festival in Mumbai, India. Holika Dahan is an auspicious ritualistic procession which commemorates the burning of Holika, a demon in Hindu mythology. As a prelude to the Hindu festival of Holi, it signifies the victory of the good over evil (IndiaTimes 2020). This year, CoronaSur, made up of two words—Corona and ‘asur’ which stands for demon—was juxtaposed as an incarnation of Holika.

On the gut of this blue demon with large canine teeth, a protruding tongue and horns, hangs his identity: a board that reads ‘Covid-19’. On his right hand and around his neck are garlands of deadly, red viruses (which, interestingly, emulate the configuration of viruses as familiarized by modern microbiology) and in his left hand, he carries a briefcase of “aarthikmandi” or economic recession. Taking a material analysis approach, studying the icon and the process of its destruction, its relationship to other images, and the responses it evokes can reveal how prominent themes and motifs from the past are employed in understanding the current and novel crisis. The intention behind the making and burning of CoronaSur cannot be simply attributed to religious belief alone—but exists in a blurred arena consisting of religion, science and modern art depictions—thus representing what Bruno Latour refers to as an Iconoclash.

The personification and demonification of Corona into CoronaSur, both at once can be understood as an act of figuring and sensing the ‘unseen’. The irony surrounding the infinitesimal virus, invisible to the naked eye, to bring about large-scale death and destruction is not lost on the onlookers. In the context of painting and visual representation of the divine, Christian Kruse (2003) explains how pictorial media were used historically to render the divine visible, allowing the beholders to see what mere (biblical) texts could not convey. Much like the divine, invisible yet so powerful, all the factual discourse and verbal descriptions surrounding the virus are still too limiting in one’s attempts to really grasp it. Building on Kruse’s analysis, Birgit Meyer (2019: 86) notes that “the condition for the visibility of the unseen was its mediation.” In the wake of such an invisible virus that has taken over so many aspects of human existence, the visual interpretation of the virus, the mediation of it through human hands—either that of scientists and their microscopic images of the virus, or on the other hand, the characterization of the virus as a demon—can be understood as an attempt at rendering visibility to the virus. The attempt of giving the virus a form is in fact an attempt at getting closer to it, of unpacking some elements of its mysterious existence.

The original image (Holika) is replaced by this new virus demon. By replacing the original icon with a modern depiction, the creators of CoronaSur are engaging in an act of iconoclasm, perhaps befitting Bruno Latour’s ‘Type B’ idol smashers, who are not inherently against images but “move from one image to the other” without clinging to just one image (Latour, 2002: 28). Latour describes that all iconoclasts can be roughly divided into five types. However, Latour’s types do not help us in understanding the second act of iconoclasm with regards to the idol. CoronaSur is not an icon to be worshipped. Unlike other divine images or icons, the act of creation of CoronaSur does not presuppose its veneration. In contrast, with all the precise details and the specific features assigned to the icon, its final objective is to be destroyed, burnt down to ashes—a second act of iconoclasm. The burning of CoronaSur consists a double-layered iconoclash, first the old icon is destroyed, followed by the destruction of the new icon as well.

The makers of the idol are also ultimately its destroyers, making it neither a simple case of iconodulism nor iconoclasm, nor one of the five types listed by Latour. Meyer explains a similar phenomenon while describing the Christian demons of Africa which entails both “a principle of rejection and inclusion” (Meyer 2019: 92), where non-Christian spiritual entities are first included into the Christian universe, and then cast out as evil. Similarly, CoronaSur must be first invoked (included in the universe of mythological figures like Holika), only to then be destroyed. In comprehending this double-layered iconoclash, where the mediation presumes an act of destruction, followed again by the final act of destruction, one must ask what the icons represent or ‘mediate’ for those who destroy it. Belting’s notion of ‘iconic presence’ (2016) which explores the picture’s capacity to render presence and true-ness to the represented can be useful in getting closer to understanding the layers of iconoclash that such acts of idol-smashing may involve.

The final act of the ritual—burning of the effigy might historically represent the victory of good (health) over bad (the virus), but it is also a highly performative act (for a video of effigy-burning, see NowThis 2020). The CoronaSur, for instance, was burnt with a large cutout of a lighted syringe (fig. 2), representing humanity’s success in finding an antidote to destroy the virus. Beyond the intertextuality of the icon borrowing from previous mythological themes, this commingling of mythology and science into a perfect harmony where a virus monster is burned through a lighted-syringe is telling of a fascinating aspect of the visual regime of the participants. Instead of competing, scientific and religious  images can merge and coalesce into one in the Indian imagination (see Subramaniam 2019), forming a religion-science-image nexus, an interference that Latour also enthusiastically explores in his works.

The effigy and its burning gained immense popularity on social media with over 52,000 watches and the generation of #CoronaSur as a popular hashtag. With the advent of social media, an image can now advance through multiple visual regimes spontaneously and quickly, evoking a multiplicity of responses. Therefore, a reflection on the responses outside of the group that participated in the burning of the effigy might be useful in understanding the other possibilities enshrined in this particular religion-science-image nexus.

Responses ranging from admiration (of the creativity) to nonchalance (describing it as “just Indian things”) poured on the internet (News18, 2020). On the other end of the spectrum the act was met with sarcasm and charges of naivety on the part of the believers. This tendency is explained as classic conundrum of the modern (person) to disparage icons as fetishes and initiates as naïve believers, according to Latour: “A Modern is someone who believes that others believe.” (Latour 2011: 43)

In an interview, a resident of the colony that sanctioned the effigy explained that it was an “attempt at public awareness on corona”, and another said that it was a part of the a series of effigies that made the public aware of the dangers and healthy practices surrounding corona, as well as other social evils such as violence against women and corruption etc., (GoNewsIndia 2020, translation by me). Even while users are able to identify it as a symbol or an icon, the response of some on-lookers ascribing naivety to the users is illustrative of Latour’s Moderns who desperately ascribe belief on to others in order to understand them. Latour encourages us to think like the initiates instead, who do not readily believe in belief to understand themselves or others (Latour 2011: 47).

This essay is an attempt at such thinking which does not presume belief, but tries to analyse the various processes that surround the evocation and destruction of a particular icon in modern times. CoronaSur is perhaps rendered both visible and present in an act of representation, followed by a total annihilation. A double-layered iconoclash brings out relevant questions about the intentionality of the creators/destroyers. Traversing through the boundaries of science and religion, it opens up possibilities to understand the complex visual regimes employed the viewers. Finally, how its destruction is viewed by different onlookers also complicates the strict binary of belief and non-belief. The mediation, destruction and responses surrounding an anthropomorphized CoronaSur is telling, at each step of the process, of the complex modes of networks religion, science and art have created, which is further heightened in the wake of a deadly virus.

Rashmi Shetty is currently a student of the RMA Religious Studies program at Utrecht University. She has worked extensively with NGOs and social development projects related to interreligious conflict resolution and education in India. Most recently, she spent almost two years working with a sister organization of the Dalai Lama Trust as a trainer, researcher, and curriculum designer for the implementation of Mindfulness and Secular Ethics-based curricula within schools in Northern India. After completing her bachelor’s degree with a triple major in Psychology, English Literature and Journalism, followed by two other postgraduate diploma programmes: Liberal Studies under the ‘Young India Fellowship’ program, and later in Buddhist Studies and Comparative Religion. Her current interests include religion and majoritarian politics focusing on India, and religious mediation on digital platforms.