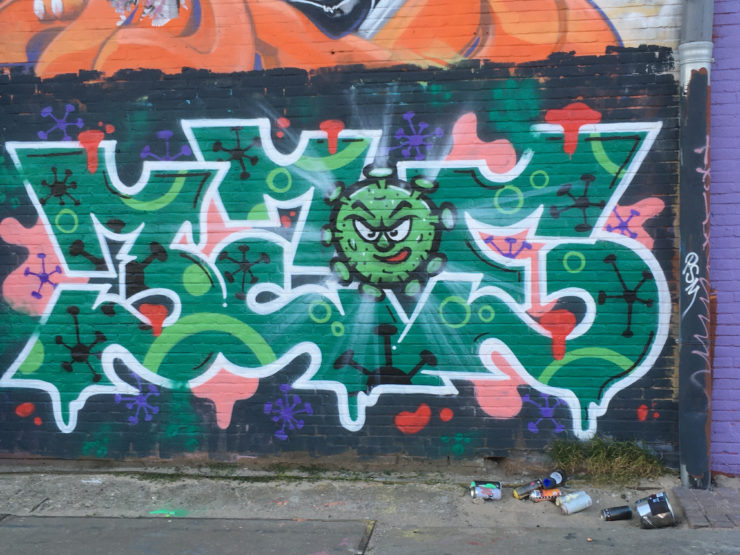 These are trying times, in which we struggle to cope with the devastating and scary omnipresence of the Sars-CoV-2- virus that causes Covid-19. Invisible to the naked human eye, the visualization of the minuscule virus depends on electron microscopic examination, yielding the iconic pictures of the virus that form the backdrop of talk-shows and news, which in turn inspire the popular imagination, in which the virus often appears as a mean, living being (even though, biologically viruses do not “live” as such, but depend on parasitical use of living cells; Scientific American). This ties into a long tradition of representing viruses in anthropomorphic terms, in medical, political and popular discourse (as pointed out by, e.g., Jojada Verrips).

As a tiny invisible intruder into people’s bodies, the virus has invaded all domains of life. A great deal of energy is currently put into diagnosing its presence through tests; the treatment of those affected most severely; the documentation of its spread across the globe and from person to person; the frantic search for a vaccine and a cure; and the deployment of interventions to track, slow down or even hamper its spread. These interventions have huge economic, ecological, political, legal, social, medical and cultural implications. While the virus itself is not visible and tangible as such, all these interventions – for which I use Corona as umbrella-term – are excessively visible and tangible. As a “total social fact” Corona calls for a thorough diagnostics. That many societies are in an exceptional state – and politically in a state of emergency – does not imply that all that happens now is so special and beyond our expertise that we are doomed to remain silent, isolating ourselves in secluded home offices and struggling to keep our academic work going via digital means. Corona calls our attention and it is important – if only to retain or regain sanity – to somehow get our heads around it as intellectuals.

Disrupting the ordinary course of events, a crisis is an intriguing phenomenon. It offers a looking glass that allows to peep deep into the structures that underpin our normality, making us see how things are and yet see them otherwise, allowing us to detect new possibilities for the future (see this vimeo link). So, while the virus itself is barred from view, the Corona-crisis enables us to see what we tend to overlook under normal conditions. It is a disruption that lays bare fundamental features of our current, hyper-interdependent world. Scholars in the social sciences and humanities do not have expertise with regard to virology or epidemiology as such. But as the virus affects society as a whole, it prompts us to think about the threat and reality of infection on the ground of our own disciplinary knowledge. Here we can tie into earlier analyses of the figural use of key terms from virology and epidemiology in politics of belonging, where the virus-metaphor has a long career in identitarian policies. Usually, the virus-metaphor is employed in a negative manner, fuelling fears of invasion by infecting agents and legitimating the closure of the endangered “body” of the nation. As scholars in the social and cultural sciences we have the expertise – building on, e.g., the work of Mary Douglas or Susan Sontag – to deconstruct such a metaphorical use of the virus in naturalizing political entities. This remains important. But the spread of the Sars-CoV-2-virus also alerts us to another dimension. It prompts us to think about infection as a modality of social relations, and thus as a symptom and harbinger of dense entanglements. Its spread reminds us how corporeal and real these entanglements are.

This is not a new insight as such. Historians know that pandemics are endemic to extended social relations, with war and trade opening up prime zones for infection (Beatrice de Graaf in Historisch Nieuwsblad), and large scale bio-industries playing a major role in more recent times. But the point is that people in Europe have been taken by surprise about the rampant spread of Sars-CoV-2 and the great difficulty of our presumably advanced societies, with their sophisticated medical apparatus, to detect its secret spread into our part of the world and stop it. This surprise betrays a waning sense of invulnerability grounded in a master narrative of progress, civilization and superiority that seems more and more deceptive. The impulse to associate the outbreak and spread of the virus with supposedly less advanced Others (be they Chinese eating wild animals or religious fundamentalists) and to close the endangered “body” of the nation – or Europe as a whole – is a symptom of the will to keep such a narrative alive. The notion of the nation being endangered by intruders from outside is a sticky breeding ground for conspiracy ideas that attribute the spread of the Sars-CoV-2-to the new 5G- wireless network, going viral in right wing populist networks these days (BBC News). It is important to deconstruct the use of body metaphors in discourses around Corona that naturalize a sense of the “body social” as endangered by outside, malevolent intruders. But the virus is real; it cannot be deconstructed away.

One way to get our heads around Corona is to take the virus as “good to think with,” notwithstanding (and certainly not neglecting) its rampant effects. This leads us to acknowledge, with Michel Serres and others stimulated by his ideas (see this article from Environmental Humanities), that infection is at the flipside of social interdependence and global connections. The occurrence of infection reminds us of the precariousness of corporeal boundaries and the permeability of the self, that may be less “buffered” (in the sense of Charles Taylor) than we may like to admit. How can the concept of infection – in its material and metaphorical sense – help us to reconfigure our understanding of “the social” in ways that take entanglement as basic material and corporeal condition of life? I mean here entanglement in multiple senses: between people across space and time, but also between people and all kinds of other species, and between living and dead matter. The figure of the virus may be seen as a viable transmitter and connector, and thus as a medium through which infections – as a particular modality of a relation – occur (in the sense of Sybille Krämer), for better and for worse.

This is the backdrop against which we try to think about Corona in our Religious Matters in an Entangled World research program. In this phase of our program we focus on Food. Corona prompted us to kick off the next focus, Body, simultaneously. Over the past month, this website has featured a number of accounts from team members and befriended affiliates that flesh out observations and themes from the study of religion in times of Corona, and our Corona Dossier will expand over the coming weeks. We invite blogs that are grounded in researchers’ thematic and regional expertise, as well as ideas for future research prompted by Corona and open think-pieces that challenge us to re-think well-trodden assumptions and biases.

With many thanks to Angelantonio Grossi, Pooyan Tamimi Arab and Jojada Verrips for stimulating comments on earlier versions of this short introduction, and my subsequent blog Studying religion in times of Corona.

This blog introduces ‘Dossier Corona’ as part of the Religious Matters in an Entangled World research project.