Seminar convened by Birgit Meyer and Jeremy Stolow, 14 and 15 June 2018

Light and divine presence form ancient and widespread associations, and scholars studying religion have explored them extensively. However, as pointed out in our Seminar Outline, this work is to a large extent rooted in textual hermeneutics and remains on the metaphorical level. At the same time, historians of science, technology and media have conducted research on the production and manipulation of light through old and new instruments, including mirrors, lenses, glass, lanterns, and electric devices. In convening this transdisciplinary seminar, our main idea was to bring these approaches into a conversation, by inviting scholars in anthropology, religious studies, Islamic studies, art history, history and media studies to discuss their insights into the complexities of light as metaphor, as technology, as medium of perception and practice. 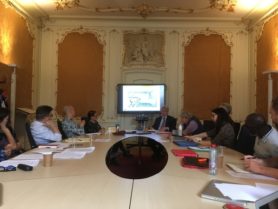 After a short welcome by Birgit Meyer, Jeremy Stolow (Concordia University Montreal, NIAS) offered an introductory lecture in which he outlined the ‘fundamental ambiguity in the category of light itself, which we conceive as both immaterial and yet inescapably embedded in the materiality of the world, as both subjective and objective, both phantasmatic and mundane’. He developed a set of pertinent questions around the ‘and’ that conjoins religion with light, all aiming at attempts to think through and bring together theological and technological understandings of light, its occurrence as metaphor and medium, subjective visual perception and objective environmental conditions, and so on.

One: the question of theologies, philosophies and theories of light, as they were developed and implemented among Sufi Muslims in the Middle Ages (Abuali, Lange) and contemporary Africa (Chapatte), in Byzantine and Medieval Latin Christianity (Pentcheva, Verrips), by contemporary Pentecostals in Africa and the US (Tonda, Rakow), new Asian movements active in Congo (Lambertz), as well as in the European Enlightenment (Koslofsky) and in modern literature (Brunotte). A whole set of questions opened up around the recurrence to the natural light of the sun, the stars and the moon, and to oil lamps, candles and stained glass windows in enabling some special, vision of the divine. 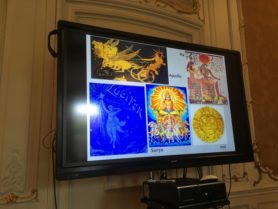 Two: types of new and old light-channelling or light-giving devices, such as oil lamps, stained glass windows (Verrips), magic lanterns (Kessler), photographs (Behrend), optical machines (Bruckstein) and hi-tech lightening systems (Rakow). How does an apparatus shape what and how one can(not) see and sense? How, precisely, is it employed to allow for a seeing of an unseen that is not available to direct sight? How are light devices used to create a particular, extraordinary ambiance? In how far do new devices contain older ones in mediating light? How may experiences of light be synaesthesized with sound (as in Pentecheva’s reconstruction of the soundscape of the Hagia Sofia)?

Three:  the manifold qualities and intensities of light, triggering questions about the capacity of light to show and reveal, but also to blind (éblouissement, Tonda), to dazzle and glitter (as with regard to heavy use of flashlights in taking wedding pictures on the Swahili coast, Behrend), or to heal (Lambertz). At the flipside, opacity and invisibility (Behrend, Bruckstein) – as light’s other, and that what light cannot penetrate – also emerged as important themes.

Four: ways of ‘doing light and dark’, for instance by marking the time of dusk as an in- between moment of ‘dusking’ (schemeren, Hoek), by using the dark of the night for immoral or highly pious activities (Chapatte), by dreaming of light and dark (Bruckstein), by orchestrating the flux of light through windows and curtains, by searching to be in the limelight or rather in the dark, and so on.

Five: light as power, or the politics and economics of control over light, for instance regarding the implications of electrification and ‘nocturnalization’ (Koslofsky) in Europe and the United States for city life, and governance in colonial empires. How did the ways in which these new technological possibilities to make light impinge on religious actors, or generated new religious movements and incentives? How was light – as metaphor and technology – employed to claim racial superiority of white people over people of African descent?

Six: Enlightenment and the production of knowledge. How to study and theorize the entangled metaphorical and technological uses of light in religious settings, without either imposing Enlightenment perspectives that merely unmask religion as illusion, or taking religion so seriously that it withdraws form scholarly analysis? How to remain alert to the fact that academic scholarship today is heir to a European Enlightenment that has its own, blinding effects with regard to others conceived to be (still) in the dark?