Skip to content
Religious Matters » Blogs » The Racket of Silence: Ramifications of a Ritual Ban on Noise Making in Accra
Twitter 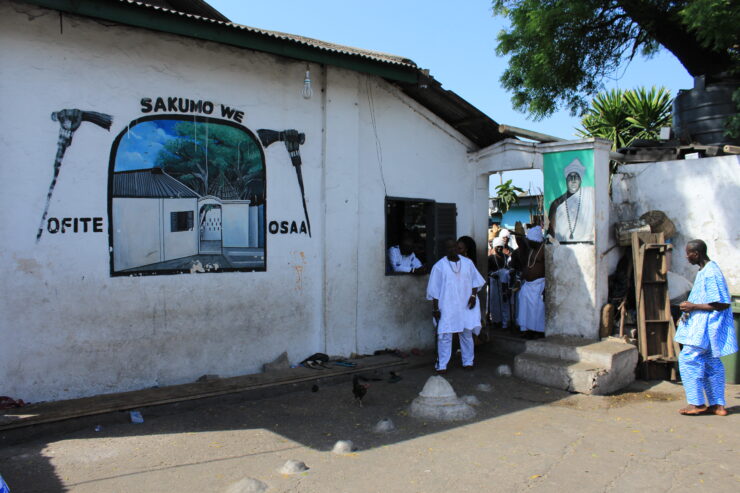 The Racket of Silence: Ramifications of a Ritual Ban on Noise Making in Accra

The sound of religion – reverberations of calls to prayer, sermons, and church bells against the urban topography, ecstatic utterances of devotees, faint sounds of breathing bodies in meditation, devotional songs uttered with dedication – has animated the minds of researchers in various disciplines, including anthropology, religious studies, sound studies, and history. Silence, on the other hand, has been a much less explored sonic condition even though sound and silence have always functioned as conjoined twins, giving life and credence to each other’s existence. It is this black sheep in the world of aurality – religious silence – that I explored for the past seven years as part of my dissertation project at Harvard University, which I defended in May of this year.

I could not have chosen a more sonically stimulating backdrop for meditating about the topic. Accra, the focus of my ethnographic explorations, is a city that breathes sound, a destination that flushes its visitors with a matrix of sonic signals that at first overwhelms and then beguiles their auditory perception. It is owing to this feature of the city that silence, whether enforced or voluntary, sets the scene for experiences that transcend the mundane. Suspension in time and place that accompanies atypical sensory exposures is especially fitting for religious settings. Perhaps that is why we often encounter silence in religious practices and environments that seek to establish a communion with the transcendent. The annual “ban on drumming” instituted by Accra’s autochthonous people, the Ga, is one instance where silence serves to denote and facilitate the period of increased awareness of suprahuman beings that descend upon the city in anticipation of the annual harvest festival, Hɔmɔwɔ. The Ga like to say that the earth becomes heavy [shikpɔŋ etsii] from the weight of the deities [jemawɔji] who arrive after the planting of millettosafeguard effective growth of the crop. Considering the magnitude of the occasion, the one-month period of relative silence ushered in by the Ga traditional priests has been long observed by the Ga indigenes and the numerous other ethnicities inhabiting the city. The practice was officially maintained after the declaration of Ghana’s independence in 1957 via the domain of the customary law, which ensures that traditional communities within each region maintain their chain of command and lifestyle. As the legally recognized custodians of Accra’s lands, the Ga are involved in the distribution of the city’s land to private and state owners, and take part in certain aspects of urban policy-making.

The unquestioned weight of the month of silence did, however, come under scrutiny in the late 1990s when the newly popular Pentecostal/Charismatic churches refused to submit to the Ga sonic diet and continued their musically vibrant services throughout the month of silence. We might attribute this delinquency to two primary factors. On the one hand, the Pentecostal/Charismatic presence in the West African religious market has been, to a large extent, fed by the latter’s positioning as the antithesis of “tradition.” From the start, the neo-Pentecostal movement took advantage of the polarity inherent in the tradition vs. modernity discourse, representing itself as the herald of development and the vanquisher of the localizing currents of “tradition” and its alternatives, “culture” and “custom.” The promise of success and wealth so central to the Pentecostal/ Charismatic rhetoric, thrived on the notion that “culture” as a localizing force forestalled Ghana’s progress. In other words, transgression of the Ga ritual ban on noise was conceived as a subversive behavior symbolizing the supremacy of the Christian god over “pagan” deities.

Apart from being a sign of protest, the violation of the ban should be examined in light of the indispensable role of music in Pentecostal/Charismatic worship, an attribute perceptible since the inception of the movement in North America yet further accentuated in the context of Africa. In this epistemological framework, all human senses are vital in one’s spiritual advancement or adulteration. The Pentecostal/ Charismatic inclination towards musicality is also accentuated via scriptural references where “noise” is redefined as a sought-after auditory experience that can potentially bring one closer to god. Just to list a few, my interlocutors routinely emphasized the divine instruction to “shout for joy to the Lord” (Psalm 98:4), to “praise him with the sounding of the trumpet” (Psalm 150: 1-6), and to “sing to the Lord a new song” (Psalm 96:1-2). Last but not least, music serves as a significant source of entertainment for young and old congregation members who delight in the dynamic and vivacious atmosphere. As such, tamed worship for one whole month represents a significant concession on the part of Pentecostal/Charismatic Christians since it depletes the entertainment value and spiritual appeal of their service.

Let us first go back to the “Drum Wars” that followed the Christian transgression of the ritual “ban on drumming” in the late 1990s. Infuriated by the audacity of the Pentecostal/Charismatic community to disregard the time-honored customary norms, the Ga traditional priests mobilized the youth within their neighborhoods to launch attacks on the errant churches. Between 1998 and 2001, churches throughout Accra were attacked with varying degrees of forcefulness – some of them were vandalized, others turned into a battleground between the Ga “traditionalists” and the reciprocating parish, yet others managed to negotiate with the Ga authorities. As the two conflicting entities mobilized to defend their positions, they utilized distinct legal approaches. Pentecostal/Charismatic Christians made a case for their defiance of the ban based on their “freedom to practice any religion and to manifest such practice” (1992 Constitution of Ghana, Article 21c). The Ga “traditionalists,” on the other hand, turned to customary law and their right to defend their tradition. The freedom of worship approach enabled the involved Pentecostal/Charismatic Christians to claim the status of “religion” while the “cultural heritage” perspective rendered the Ga “ban on drumming” a “cultural” practice. The contrasting legal standpoints incited fervent public and political discussions regarding the nature of “culture” and “religion.”

Of course, “culturalization” of traditional religiosity has been a common practice in the Christian missionary work and the modernist discourse that accompanied the process of colonization. The post-independence emphasis on “culture” as the core of Ghanaian identity contributed to the reframing of traditional religion as “cultural heritage,” further dissociating it from the country’s “religions” – Islam and Christianity. In fact, the culture-religion binary espoused in the Ghanaian Constitution divulges the symbolic system that structures contemporary discourse on modernity, development, and progress. In the Pentecostalite city of Accra, compartmentalization of a practice or a belief in the category of “culture” is often commensurate with its association with lack of refinement and even backwardness. As will be explained later, what makes this case study worth examining is the advantages that the “cultural” tag yielded for the Ga community.

As the existing tensions exacerbated, the state devised a two-tier intervention to alleviate the conflict on the one hand, and to tackle urban noise pollution more broadly, on the other. The second step involved resurrecting the 1995 noise-abatement bylaw and mobilizing Nuisance Control Task Force, an interistitutional body in charge of regulating urban noise. The Task Force consisted of representatives of the Accra Metropolitan Assembly, the Environmental Protection Agency (EPA), and the police. At first glance, the imposed noise regulations meant that the Ga community vigilantes were no longer entitled to enforce the “ban on drumming” on their own. Instead, if citizens – whether Ga or non-Ga – became witness to disproportionate levels of noise in the city, they had the right to involve the appropriate state agencies and settle the matter via legal means. In theory, the Task Force is accountable for ensuring that music stores, nightclubs, religious institutions, and other parties comply with the mandates of the EPA. As expected, public statements by state representatives made sure to emphasize that the measure was put in place to alleviate the problem of noise pollution in the city and “to enforce the law” rather than compel Pentecostal/Charismatic churches to comply with the directions of the Ga Traditional Council. All things considered, my observations and interactions with the members of the Task Force and representatives of the two conflicting parties have brought to light the fact that the group comes together exclusively during the period of the ban and turns a blind eye when the Ga traditional authorities levy customary penalties on the transgressors. In other words, behind public statements and official regulations, we find that the Task Force carries a decorative function, enabling the Ga community leaders to continue implementing their customary regulations.

This state of affairs urges us to turn the spotlight on the Ghanaian secular edifice. As the academic exploration of secularization has drawn considerable criticism in the past decades due to its modernist bias and universalism, scholars have started to view the historical context as pivotal for understanding the role of religion in the given nation-state. On that account, it has become redundant to speak of the official blueprint of secularism, an outcome of the discursive prominence of uniquely European dialectic of Protestantism and modern science. Recognizing and researching the diversity of “secularities” across borders is a challenging task since the template of modernization introduced via the colonial enterprise, and enshrined in the constitutions of post-colonial states, renders a specific church-state dynamic as the ideal. Consequently, anything that deviates from the template emerges as “deficient,” insufficiently “secular” and hence, not quite modern.

To avoid these pitfalls, I have found Monika Wohlrab-Sahr and Marian Burchardt’s (2012) notion of “cultures of secularity” fruitful for looking beyond the institutional distribution of power and at the negotiations that take place between traditional religion and the state behind closed doors. In fact, the uninterrupted presence of African traditional religion in the public domain – notably, in the guise of “culture,” is fully congruous with the traditional alliance of religion and citizenship. The hybrid model of justice maintained in Ghana, and many other African countries, largely contributes to the uninterrupted blending of the sacred-secular categories. The syndicate of Western secularism and African traditional conceptions about religiosity has produced an environment where African traditional religion, compartmentalized in the domain of “custom,” is allowed to remain. The resolution of the “Drum Wars” is just one illustration of this dynamic. In customary terms, subversion of the Ga ritual directives supersedes the Christian right to worship yet the current constitutional set-up of Ghana’s secularism puts freedom of worship above the customary law. Nonetheless, the unbroken institutional and emotional relevance of traditional authority enables the “custom” to leak through the legal restrictions, rendering the Pentecostal/Charismatic refusal to obey the “ban on drumming” an act of subversion despite the human rights violations committed by the Ga traditionalists as they attacked the transgressing churches.

In conclusion, the “Drum Wars” represent an illuminating case study due to the built-in legal and ideological tensions between “culture” and “religion.” At a glance, the Eurocentric ranking of religious traditions latent in the Ghanaian Constitution – namely, the positioning of Abrahamic religions at the top of the pecking order by labeling them as “religion,” accords considerable privileges to Christianity and Islam (i.e. tax exemptions, right to participate in constitutional bodies). However, taking a closer look at how the state handled the “Drum Wars,” we find that the label of “culture” did, in fact, enable the Ga traditional authorities to circumvent some of the legislative constraints applied to “religions.” Since the category of “religion” in the Ghanaian statutory law is not designed to accommodate the non-binary lifeworld inherent in the traditional religion, it would be constitutionally implausible for a religious entity to forcefully entangle another faith group in its religious directives. The “cultural” label, however, proved to be strategically effective for the Ga community in foisting their “customs” on all residents of Accra.