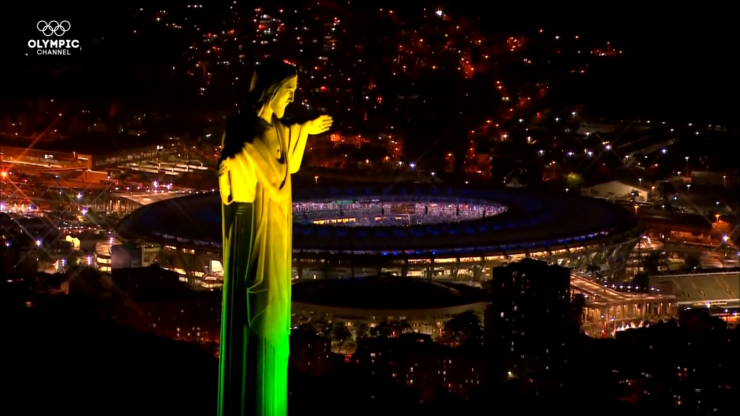 The modern Olympic Games and the material dimension of ‘worldview’

On 23 July 2021 Tokyo will set the stage for the opening ceremony of the 32nd modern Olympic Games. 206 countries are eligible to participate in the 33 sports of the upcoming summer edition, which was scheduled for July 2020 but postponed due to Covid-19 (Seterra 2020). At the moment of finishing this blog, a few days before the opening ceremony, Olympic news is still ruled by uncertainties (see Bouwhuis 2021, 125-126 for a reflection) with regard to the momentum of the Covid-19 crisis in Japan and the precise regulations. Visitors are no longer welcome in the Olympic stadiums and if it would not have been for the organizing IOC (International Olympic Committee), the Games were probably cancelled again.

Throughout the past few months I have had the confusing experience of writing a thesis on earlier editions of the summer Olympics while the news was dominated by Covid-related question marks. In Beijing (2008), London (2012) and Rio de Janeiro (2016), the stadiums were fully packed for their respective opening and closing ceremonies, and social distancing would have been unthinkable. In our global, digital age, these ceremonies are large, televised mass events which do much more than officially demarcating the time frame set for Olympic competition. They are used to express and highlight, in various ways and throughout the various segments of the ceremonies,[1]  the values and principles related to Olympic sport. These values and principles are collected under the header of “Olympism”, a term that was coined by Pierre de Coubertin (1863-1937), the purported founder of the modern Olympic Games.[2] Since 1908 the ‘fundamental principles of Olympism’ are codified in an Olympic Charter (see IOC 2020, 11-12) which officially represents the vision of the IOC, the Olympics’ governing organization. In this blog I explain how Olympism can be understood as a ‘worldview’, focusing particularly, in the spirit of ‘Religious Matters’, on its material dimension(s).

For the purpose of my thesis I was primarily interested in the ways in which Olympism is configured in a ceremonial context. My largest theoretical challenge, which ended up as a theoretical proposal, was to substantiate my understanding of the term Olympism. Working from the field of religious studies, I was alert from the start that I would have to explain why at all the study of Olympism may be relevant to scholars of religion. I swiftly discovered that Pierre de Coubertin himself considered Olympism a religion, but this did by no means ‘solve’ the debate. De Coubertin’s use of religious terminology has been understood (and criticized) in various ways (Gutmann 2004 (1978), Ruprecht Jr., 1998, Jirásek 2015), and I also realized that De Coubertin’s ideas could not be directly projected onto the formal and practical modus operandi of the IOC in the early twenty-first century.[3] Moreover, I was aware of the discursive problems that come with the use of the term religion (see Bouwhuis 2021, 30-31), and I anticipated that these problems would surge in the contemporary Olympic context, where the link between Olympic sport and religion is by no means self-evident.[4]

Scholars of religion deal with the difficulties related to their terminology in various manners. One trend is to discuss religion within the much broader context of worldview studies, where religion can be conceived as a subset of ‘worldview’, which is on itself a subset of culture (Droogers and van Harskamp, 2014; Taves, Asprem & Ihm, 2018; Taves, 2020; see Bouwhuis 2021, 30-33 for an extensive reflection). Worldviews are produced through the human capacity to not only attribute meaning to particular ideas and practices, but also to ask and reflect on “big questions” (e.g. when does something exist? why do we exist? where are we going?) (Taves, Asprem & Ihm 2018, 207-208). Through my study of Olympism, I came to the conclusion that this ‘philosophy of life’, as the Olympic Charter calls it (IOC, 11), evidently qualifies as a worldview. Its values and principles attribute fundamental meaning to de Coubertin’s initial ideas about humankind, human interaction and human progress. They also indicate how sport should be practiced properly and how Olympic competition relates to virtually all dimensions of human existence.

It is particularly interesting and relevant for ‘Religious Matters’ and the study of material religion that the term ‘worldview’ has a mentalist connotation that initially appears to exclude or downplay materiality and human practice. In this regard the word ‘view’ implies a static vision (of the human eye) that is relatively resistant to change and/or deceit (see Bouwhuis 2021, 31-32 and Bouwhuis 2019). In my thesis I employ the concept of ‘worldview dynamics’ (used by Taves & Asprem, and inspired by André Droogers) to incorporate the suggestion of change in the workings of worldview and to emphasize how worldviews are not only generated through ideas but also through human enactments or practices. Worldview dynamics encapsulates an understanding of worldviews as interactive processes embedded in social relations (Taves, Asprem & Ihm, 208; Taves, 144). My aim in studying the worldview dynamics of Olympism was twofold. On the one hand, I wanted to demonstrate how the ideas underpinning the worldview had changed over time and were, in that sense, more flexible than the formal set-up of the Olympic Charter (which regularly adopts slight changes as well) suggests. On the other hand, I noticed that the configuration of Olympism as worldview was affected and intermediated by concrete sociopolitical and cultural circumstances and/or actors. The configuration of Olympism as worldview is not detached from politics, notwithstanding the IOC attempts to regulate political neutrality (see IOC 11).

The ideal of political neutrality is perpetuated mainly because the IOC, in its role as an overarching international body, has to publicly approach all participating nations in an equal fashion. The host country of any Olympic edition is the only participant that is evidently and publicly ‘privileged’, in the sense that it is allowed to profile itself as a nation within a facilitated international context. This becomes especially visible during the Olympic opening and closing ceremonies, where the host countries perform so-called “narratives of the nation”[5] (e.g. audiovisual shows full of theatrical storytelling, song and dance) under the supervision of a globally orientated organization. At this point one may anticipate a firm tension between nationalism and internationalism, in the sense that a host country could hypothetically downplay, challenge or even reject the values and principles of Olympism by embracing nationalism. One of the outcomes of the thesis, however, was that all recent ceremonies actually accorded in their celebration of (global) “togetherness”, a politically charged ideal that is directly commensurable not only with the values and principles of Olympism but also with the objectives of the United Nations (UN), a close partner of the IOC today. Even the Olympic ceremonies of Beijing in 2008, which were also criticized by journalists and academics for their suggested nationalist display of a Chinese ‘military economy’, built towards a climax that thematized the globally orientated credo of “one world, one dream”. The dominance of Olympism in a ceremonial parade of nations can be explained by the fact that these nations all have to comply with the Olympic Charter in order to participate. Moreover, the IOC oversees the organization of the ceremonies, and host countries are not allowed to perform a “narrative of the nation” which defies the values and principles of Olympism.

The challenge in this process of negotiation is to accommodate Olympic ‘theory’ (e.g. the regulations codified in the Olympic Charter) and the Olympic practice of enacted ceremonies. According to Olympic theory, the values and principles of Olympism are fundamental and relatively resistant to change. They present rights and regulations which are in force for all people who somehow belong to the Olympic Movement (e.g. participants, coaches and judges, but also visitors), independent of their (national or social) origin. In Olympic practice, however, these values and principles are enacted through gestures, symbols and performances which may not necessarily follow the logic of Olympic theory. The concept of worldview dynamics may account for the fact that the relation between the IOC and the host country and the precise configuration of Olympism as worldview will differ per Olympic edition.

Since Olympism is predominantly configured to a global audience (e.g. people may watch an Olympic ceremony rather than read the Olympic Charter) through Olympic ceremonial practice, the enacted or material dimension is crucial to understanding Olympism as worldview. While the two ceremonies standardly include a speech by the IOC president in which the values and principles of Olympism are verbally expressed, Olympism is arguably known to the greatest degree from the Olympic logo (e.g. the five interlaced Olympic rings) and the various symbols (e.g. the Olympic flame, the ‘peace’-sign) employed by and/or related to the Olympic Movement. Without this visual vocabulary and without the performances enacted in the Olympic ceremonial context (and specifically in the “narratives of the nation”) the configuration of Olympism as worldview cannot be understood in a complete and cohesive way.

On a disciplinary level my thesis has been a project to explore the theoretical and methodological boundaries of religious studies in a stimulating, non-subversive fashion. I hope that its findings may support future research, not only on the configuration of Olympism during future editions of the Games but specifically on the relation between worldview (and worldview studies) and religion (and religious studies). I am convinced there must be more and similar case studies in which the conception of a coherent set of ideas and practices as ‘worldview’ may help to approach and reconsider the discourse on defining ‘religion’ and the advent of worldview studies. I also hope that my employment of the concept of worldview dynamics helps to understand why mentalist and material dimensions are both fundamental to the study of worldview.

Tim Bouwhuis (1996) recently finished his RMA thesis in Religious Studies (Utrecht University). He has a background in History and Film Studies. Among his primary research interests are religion and popular culture and (religious) identity politics in our global, digital age.

This blog is entirely based on the thesis ““Togetherness” in a global, digital age: the Olympic opening and closing ceremonies of Beijing, London and Rio de Janeiro and the configuration of “Olympism” as worldview”, which can be accessed via Academia.

Bouwhuis, T. 2021. ““Togetherness” in a global, digital age: the Olympic opening and closing ceremonies of Beijing, London and Rio de Janeiro and the configuration of “Olympism” as worldview”. RMA Thesis. Utrecht University. Available via Academia and Igitur (link to Igitur will be added later).

Droogers, A. and A. van Harskamp, eds. 2014. Methods for the Study of Religious Change. Sheffield: Equinox.

All figures are screenshots of the respective ceremonies, which have been made publicly available via the IOC’s Olympic YouTube-channel.

[1] Chapter 3 of the thesis provides a compartmentalization of the various (sub-)segments of the opening and closing ceremonies.

[2] The role of Pierre de Coubertin in the conception of the modern Olympic Games is discussed extensively in chapter 1 of the thesis.

[3] In chapter 1 and in chapter 3 (see particularly Bouwhuis 2021, 89-90) I expand on the disjunction, apparent in some specific cases, between the ideas of de Coubertin and the modus operandi of the IOC during actual Olympic editions (this concerns both past editions, including when de Coubertin was still alive, and the present editions which are the focus of my analysis).

[4] I expand on this in the introduction of the thesis.

[5] The concept “narrative of the nation” was introduced by cultural theorist Stuart Hall (1992) as “a set of stories, images, landscapes, scenarios, historical events, national symbols and rituals that stand for the shared experiences, sorrows, and triumphs and disasters which give meaning to the nation”.