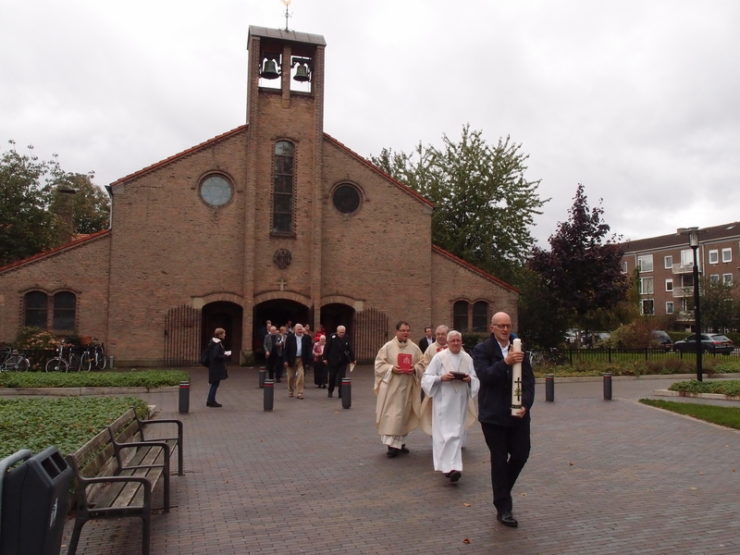 The closing down of church buildings is a widespread phenomenon in the Netherlands. But what does the act of abandoning a church actually look like? The pictures below are intended to give an impression. I took them during the last celebration of mass at the Sint Jacobuskerk (Saint James Church) in Utrecht on October 8, 2017. The Catholic Church in Utrecht is in the midst of an extensive process of downsizing its real estate and the Jacobuskerk was one of the first buildings to be sold, despite fervent protests from its community.

Strikingly, when abandoning the building turned out to be inevitable, the Jacobus community did not join another Catholic church in the city, as originally envisioned by the Catholic authorities. In line with its desire to stay present in the local neighborhood (Utrecht Zuilen), it found a place in the neighboring Protestant Bethel Church. Here, the Jacobus community was able to rent a space and hold its own services. As its chairman put it: “Five hundred years after Luther, Protestants and Catholics are finding each other again.” If this cooperation does indeed lead to a rapprochement between these religious groups, this seems to be an unintended local consequence of the Catholic Church’s buildings policy in Utrecht.

After the celebration of mass, the members of the Jacobus community formed a procession and walked to the Bethel church – at the other side of the roundabout – while the latter’s bells were ringing. At the front of the procession, two priests carried the community’s Bible and altar missal, while two pastoral workers carried the Paschal candle and holy oils. The Body of Christ (i.e. the consecrated bread) was not taken to the Protestant church, because this has to be kept within a consecrated (Catholic) church.

The Jacobuskerk was bought by the successful evangelical Best Life Church. While the building retained a religious purpose, its interior transformed quite drastically: the church pews were removed and the altar was replaced by a large stage. Meanwhile, the Protestant Bethel Church is, like the Jacobuskerk, faced with a decline in active membership. Its building will be renovated in the next two years to enable its multiple use for both religious gatherings and housing. The people of Jacobus hope to retain their home here in the years to come.

See the Dutch version of this gallery for a slightly more detailed text and photo captions.