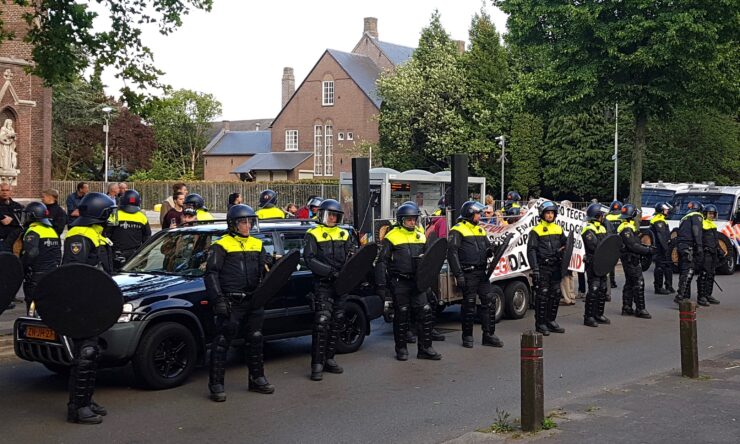 New Open Access article on pork and the far right

A new Open Access article by Margreet van Es has been published in the journal Religions. In this article, Margreet van Es provides an analysis of a public protest by the far-right group Pegida-Netherlands on 26 May 2019. The participants attempted to demonstratively eat pork near a mosque in Eindhoven. This led to fierce responses: hundreds of young Muslim counter-protesters prevented the Pegida supporters from reaching the mosque, shouting insults at them and throwing stones at the police. Based on field notes from the event and a variety of other research material, this article shows how pork becomes a means of provocation in a larger entanglement between people and their perceived intentions, other objects, times and places. Furthermore, Margreet van Es argues that the clash between protesters and counter-protesters can be seen as a theatrical performance set up by Pegida to share its worldview with a wide audience. She critically analyzes the role of pork in Pegida’s attempt to ‘reclaim’ Dutch territory that has been ‘lost to Islamization’. The article also discusses how provocations bring about counter-provocations. Finally, the author critically evaluates Pegida-Netherlands’ official stance of non-violence vis-à-vis the implications of its protest language.

Click here to read ”Roasting a Pig in Front of a Mosque: How Pork Matters in Pegida’s Anti-Islam Protest in Eindhoven”